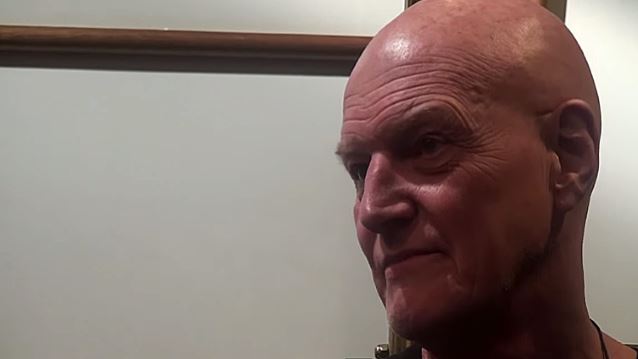 CHRIS SLADE Confirms Return To AC/DC: 'This Is An Amazing Opportunity For Me'

Drummer Chris Slade has confirmed that he will rejoin legendary hard rockers AC/DC for their appearance at the 57th annual Grammy Awards as well as the band's upcoming tour.

Said Slade in a statement: "This is an amazing opportunity for me. After all, most people don't ever get to play with their favourite band once, let alone TWICE!

"I would like to thank everyone for the overwhelming support I have been shown personally, on the Facebook page and other social media. Not one comment has gone unread and it has been very humbling. Thanks so much.

"We apologise for the secrecy. Please understand this was for all the right reasons."

Fans began speculating about Slade after he had to bow out of, of all things, a personal appearance at a California optometry practice last weekend.

The optometrist wrote on Facebook that the drummer had to cancel because of "big news regarding Slade and his career coming in [the] next several days."

The Grammy Awards performance, which will take place on February 8 at the Staples Center in Los Angeles, California, will mark AC/DC's first appearance on national TV in 14 years and its first live performance since the December release of its new album, "Rock Or Bust".

The band is also scheduled to headline California's Coachella festival in April, with European and North American tours planned for later in the year.

As previously reported, AC/DC drummer Phil Rudd's scheduled February 10 appearance in a New Zealand courtroom to address charges of "threatening to kill" and drug possession has been delayed until April because Rudd's lawyer has quit the case. According to Stuff.co.nz, attorney Paul Mabey stepped away on what he described as "amicable" terms. He did not elaborate on his reasons for leaving, saying, "It's just a professional decision that we have made."

Rudd's new lawyer is Craig Tuck, who has "appeared in some of New Zealand's highest profile cases acting for entertainers," according to LawAid.co.nz.

Rudd is reportedly required to stay near his Tauranga, New Zealand home for the duration of his case.