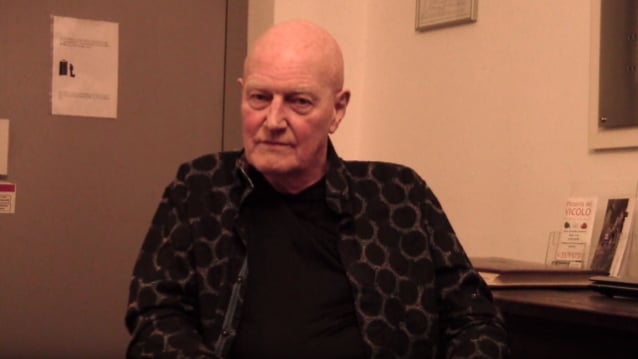 CHRIS SLADE: 'To My Absolute Knowledge, I Am The Current Drummer In AC/DC'

Chris Slade says that nobody from the AC/DC camp has told him he is no longer the band's touring drummer.

The 73-year-old played drums for the legendary hard rock band's "Rock Or Bust" world trek after Phil Rudd was arrested for drug possession and threatening to kill an employee. Since then, AC/DC has apparently finished recording a new album, with Rudd sitting behind the kit in the studio.

Slade addressed his current status with AC/DC during a new interview with Rolling Stone. Asked if the AC/DCWikipedia page is accurate in saying that he is still the band's current drummer, Chris said: "To my absolute knowledge, and this is me being absolutely honest, I am the current drummer in AC/DC. [Laughs] It may sound deluded to some people. I've said that before in interviews and people have gone, 'The man is deluded. He's lost it. He doesn't know what he's talking about.'

"Nobody has ever called me and said, 'By the way, you're not the current drummer' or, 'By the way, Phil's been in the band for three years,'" he continued. "Nobody has ever said that. As far as I'm concerned …God, I'm philosophical enough to realize that Phil may well be back in the band. I have no idea. I had no idea last time when they called me before 'Rock Or Bust'. I'm open to all possibilities. That's the way people should be, open-minded."

"We were in Atlanta, Georgia, and we auditioned a few people," Slade recalled. "Some of them were really good. I said, 'What's happening tomorrow?' Someone goes, 'Tomorrow we've got Axl Rose.' I went, 'What?! Axl Rose!' I knew his reputation. 'Wow, that is left field. I never saw that coming.' I'd only ever heard his GUNS N' ROSES voice. I didn't know he could cut it. He showed up the next day at the rehearsal place in Atlanta and he seemed like a really nice guy. He was telling jokes. The rest of us were, like, 'Wow. This is unprecedented.' At least in my mind, that is. When he started singing, it was, like, 'Wow!' I never even knew he could sing like that. It was brilliant, absolutely brilliant. He turned out to be the nice guy that I thought he was. I found out he wasn't putting on an act or anything. That's how he was."

"To be honest, those pictures are so old," Slade told Rolling Stone. "I think it was probably … I don't know if I was the first drummer to go through Canada. But it looks, to me, like old pictures, to be honest. If you look at the hair on everybody and what the hair is like now, including me, you'll see what I mean. There are so many rumors about AC/DC. There are daily, and I mean daily, rumors. 'Oh, Angus has bought New Zealand.' It's ridiculous. 'Oh, I know things because I know. They recorded an album and they're going to be touring in 2020!' You know what? They're not. [Laughs]"

A September 2018 report from JAM! magazine cited a "reliable source inside the AC/DC camp" as indicating that the band was recording a new LP which will utilize previously unreleased guitar tracks from Malcolm Young on all the songs.

"That could happen," Chris told Rolling Stone. "We all know about technology. I'm certain that Malcolm and Angus talked in great depth about this before he passed and before he was really, seriously ill. I'm sure there was a master plan. Of course, you throw away plans. Plan A turns into Plan Z. Personally, my gut feeling is that Angus is not going to retire. There could quite possibly be another album. I'm pretty certain there will be. Who is on it? I have no idea. Will Cliff come out of retirement? Who knows? If he's had enough fishing for a while, maybe he'll want to come back to rock and roll."