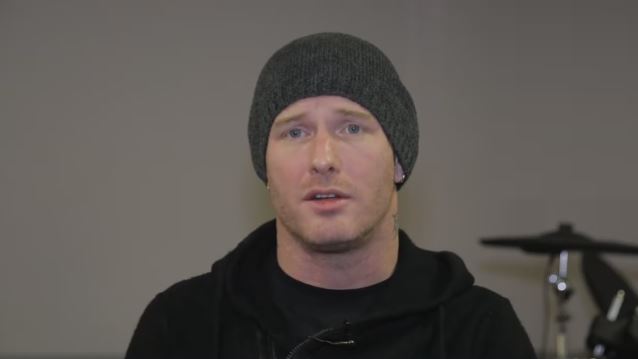 SLIPKNOT and STONE SOUR frontman Corey Taylor spoke to U.K.'s Metal Hammer magazine about the U.S. presidential campaign and the contenders to take the best starting positions before the November election. He said (see video below): "Man, I'll tell you what… I haven't seen this much mudslinging in a long time. In fact, I don't think I've seen mudslinging like this ever. This has got some, like, 1800s political stuff kind of going on, where it was pretty much no holds barred, tear down the other guy, and just kind of see what happens."

He continued: "I'm nervous, to be honest, as far as watching the GOP, the Republican side of things. There's a lot of derision coming from those candidates, a lot of destructive talk instead of constructive talk. So I'm kind of watching that."

Taylor went on to say that he supports Bernie Sanders because "honestly, just based on everything that I've read, everything that I've heard. I haven't done a lot of research on his voting record or what he's done, but I love the fact that he's been an independent for years. The only reason he's joined the Democratic party is because, apparently, you have to be a part of one of those parties to be taken seriously, which I don't really like; it's a very corporate way to kind of deal with the President of the United States. But I love the guts that he has to really stand up and talk about things other than the hot-button issues that the Republicans and Democrats think matter. It seems like all of those issues are designed to put fear into people, and the things that Sanders is talking about has everything to do with trying to bring people together, and how to right wrongs, and how to bring real democracy back. And I can't speak for anyone else, but I think that's more encouraging than discouraging."

In an interview with The Guardian conducted earlier in the month, Corey described the current election cycle as "a fucking mess." He said: "The only thing I can really compare it with was when the whole governor fiasco was going on in California, when Arnold Schwarzenegger won, and when everyone and his mother announced themselves as candidates. The fact that Donald Trump is still is viable candidate makes me want to eat my fucking shoes. There are too many candidates focused on dividing us, and not enough talking about bringing us together. And that's one of the reasons why I support Bernie Sanders. And I will never support anyone who uses racism as a passive-aggressive way to win votes."

Corey Taylor on the US election

We talk to Corey Taylor about his thoughts on the US Presidential election...