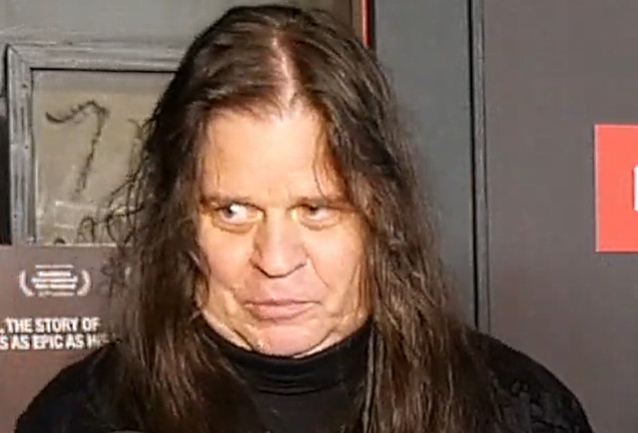 At the September 20 premiere of the first-ever career-spanning documentary on the life and times of legendary metal icon Ronnie James Dio at TCL Chinese Theatre in Hollywood, California, former DIO guitarist Craig Goldy recounted a story of Ronnie's kindness toward him. Speaking to "The Blairing Out With Eric Blair Show", Craig said (as transcribed by BLABBERMOUTH.NET): "When I first got in the band ROUGH CUTT, I came from being homeless, living on the streets. [Wendy Dio, Ronnie's widow and longtime manager, who also managed ROUGH CUTT] actually rented me gear to take part of the auditions because I didn't have equipment. So they were already being good to me just to audition for ROUGHT CUTT. Then [Ronnie] sat in on the audition and we did [BLACK SABBATH's] 'Heaven And Hell' and [RAINBOW's] 'Man On The Silver Mountain' together. And then when I got the [ROUGH CUTT] gig, I'm sleeping couch to couch 'cause I was still homeless, but I had a place to say with bandmembers. One day the bandmember came home and screamed and yelled that I had used his can of tuna to make a tuna-fish sandwich. I know this sounds ridiculous. And that fit was heard around the world. The very next day I look out the window and I think I see Ronnie's car pull up. There's RonnieandWendy with two full bags of groceries. They walk up the stairs, they kick the door — 'cause they don't have a free arm. I open the door. They storm in. They slammed the groceries on the table. They go, 'These are for Craig. Leave him alone.' And off they went just as fast as they came in to then begin recording for the 'Holy Diver' [album] again. They shut down the 'Holy Diver' recording session for that day to go to the store to shop specific items that would become four full bags of groceries over a tuna-fish sandwich for me. Now, how do you forget something like that? That's the level of kindness of that man."

Goldy joined DIO during the "Sacred Heart" tour in 1986 after original guitarist Vivian Campbell was fired from the band following a contentious business disagreement with the legendary heavy metal singer and Ronnie's management. After joining DIO, Goldy became Ronnie James Dio's right-hand man and went on to co-write such DIO classics as "Dream Evil", "One More For The Road", "As Long As It's Not About Love" and many others.

For several years, Goldy played sporadic shows with DIO DISCIPLES, which is made up of former members of DIO, along with a rotating lineup of singers, including former JUDAS PRIEST frontman Tim "Ripper" Owens.

Back in 2015, Goldy paid tribute to Ronnie, telling Rock Scene: "Just like you will always remember where you were on 9/11, anyone who ever heard Ronnie James Dio sing for the very first time will always remember where they were. I will never forget it. [I was] sitting in a car with a friend a mine; we were getting a band together. I was all upset 'cause DEEP PURPLE had just broken up and disco was taking the scene, so the world was upside down. And all of a sudden I heard 'Man On The Silver Mountain' [from Ritchie Blackmore's RAINBOW] come on the radio, and I said, 'Who the hell is that?' And next thing I know… I came from an abusive family, so I was living on the streets of San Diego. Five years later, I'm headlining Madison Square Garden with my favorite singer, Ronnie James Dio, playing songs that we wrote together, and it was an actual dream come true. So dreams come true."

He continued: "Ronnie changed the world because he created his own universe with his lyrics and the way he wrote. And he also… That kind of music called to the downtrodden and the black sheep of the globe. 'Cause you could hear what hurt Ronnie was… subject matter that also hurt me. And when he was angry, those are the things I was angry about. So it was almost like we were talking to each other before we even met; it was like I knew him before I even met him. And he had that relationship with the whole world."

Goldy added: "He was so good to his fans. I mean, he would always pick the least and make them the most. The one weirdo that got backstage who always got overlooked or was the last one to be picked on the volleyball team in high school, Ronnie would pick him and make him feel the most special. He always had a way of making you feel like you were the only one in the room for that time that you were together. It'd be almost like having the golden ticket for the cholocate factory and meeting Willy Wonka in the chocolate factory. And so you had the keys to the kingdom and you were gonna get to meet the king, and he would turn it all around and become your servant. And he'd go, 'Hey, can I get you anything? Can I do anything for you? Can I make you a sandwich? Can I pour you a drink?' And then he would just blow their minds with kindness.

"Anybody who didn't ever really meet him in person, they had a special relationship with him because of the way he wrote and the way he sang and the way he was to his fans. His family was the world, and the whole world was affected by that man."

Asked what the most important thing was that he learned from Ronnie, Craig told Guitar World magazine in a 2013 interview: "There are so many, but a lot of it is first the music has to feel good. The groove has to be great because a lot of guitar players write for the riff first. The way he wrote songs was special too, because he really toiled. The law of hit songwriting is melody first, lyrics second. A lot of people don't do that; a lot of singers sit around with their notebooks filled with lyrics and they try to cram their lyrics into a song. So the two have already been sitting around collecting dust and they try to call it an original song. That's not the way you do it. You’ve got to start from scratch."

He continued: "[Ronnie] would really toil because it's hard to tell a story and hit people in the heart with the limited amount of syllables you have in a song. It's not an easy task, but I watched him do that and I learned from him."