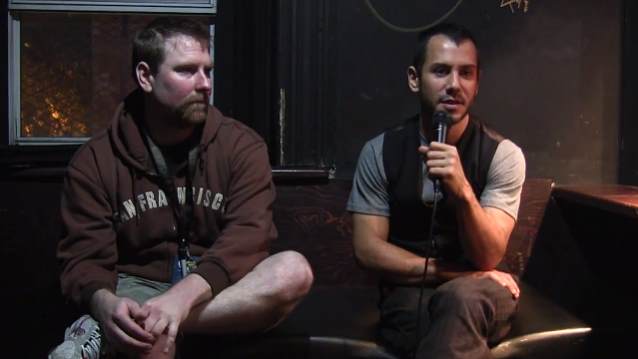 Former DEATH and current CYNIC members Paul Masvidal (guitar, vocals) and Sean Reinert (drums),who are both gay, have spoken out for the first time about their sexuality in the context of their music.

Masvidal, 43, who had come out to friends and family in 1991, and later began exploring drag bars and gay nightclubs while on tour, told the Los Angeles Times, "It's one thing to make out with your bandmates and just 'play gay' because it's edgy. It's another thing to actually live it."

Reinert, 42, who took a bit longer to come out, said: "I knew that, secretly, I wanted to go to those clubs too. But back then, my stereotype of how to be gay was wearing dresses and tank tops. I didn't have any masculine, metal role models who were gay."

He added: "I went on a date with this one awful guy who blogged about it on his web site. So for years, if you typed my name into Google, the second thing that came up, after 'Sean Reinert Drummer,' was 'Sean Reinert Gay.'"

Masvidal and Reinert admitted to the Los Angeles Times that they were nervous about coming out publicly. "There's definitely going to be a reaction, but it's important that we be truthful," Masvidal said.

"Gay people are everywhere, doing every job, playing every kind of music and we always have been," Reinert added. "It's taken me years to finally be brave enough to say, 'If you have a problem with that, then throw out our records. That's your problem, not mine.'"

JUDAS PRIEST singer Rob Halford, who revealed he was homosexual during a 1998 appearance on MTV, stated at the time about his decision to publicly discuss his sexuality: "I think that most people know that I've been a gay man all of my life, and that it's only been in recent times that it's an issue that I feel comfortable to address, and an issue that has been with me ever since recognizing my own sexuality. It's something that I've been comfortable with forever, something that I feel has a moment, and this is the moment to discuss it and to go into the reasons, and the whys and the wherefores as to the statement, the so-called coming out phase."

He continued: "A lot of homophobia still exists in the music world, in all kinds of music. I wouldn't say it's any more phobic in metal or rap or whatever this music is that I'm doing now, but that's just something that I think we all have to address in our own lives. If we have a problem with it, I think we should seek help and find out why we do have a problem with it."

In openly discussing his sexuality, Halford said that he hoped he would be helping others to do the same.

"I think it's difficult for everybody, you know, in making the decision to come forward and be who you are, based on peer pressure, especially if you're a teenager," Halford said. "That's where a lot of the anxiety begins, and so maybe people like myself and others that do step in front of a camera and let the world know, maybe it's of some help, where there's an individual that's been successful, that's been able to achieve dreams and visions and goals in life and not let the issue of sexuality be something to hold them back, so I think it's an important thing."

CYNIC — consisting of Masvidal, Reinert and bassist Sean Malone — released its new album, "Kindly Bent To Free Us", on February 14 via Season Of Mist.

Masvidal and Reinert are continuing to tour with DEATH TO ALL , which features former members of DEATH celebrating the life and music of Chuck Schuldiner. The band's current touring lineup includes the three surviving members of DEATH's "Human" lineup (Masvidal, Reinert and bassist Steve DiGiorgio),along with with special guest vocalist/guitarist Max Phelps of CYNIC/EXIST, performing material from DEATH's first four albums.