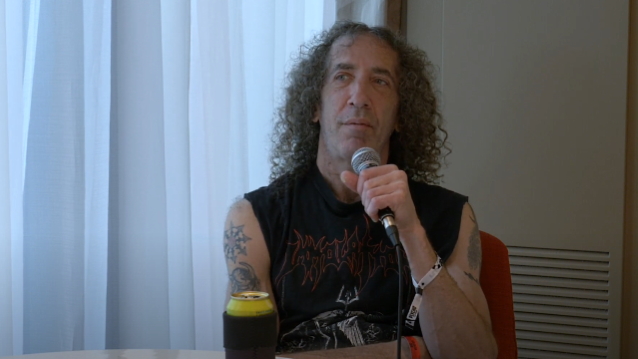 To celebrate ANTHRAX's 40th anniversary in 2021, the band's social media accounts offered a series of video testimonials sent in by former bandmembers, fellow musicians, colleagues, and industry veterans sharing behind-the-scenes stories of working with the band and what ANTHRAX's legacy has meant all these years on. These videos honored each album in chronological order beginning with the original release, "Fistful Of Metal". The 11-week series included video contributions from former ANTHRAX bandmembers Dan Lilker, Dan Spitz, John Bush, Neil Turbin and Rob Caggiano.

Lilker, who played bass on "Fistful Of Metal" and wrote most of the music for the record, told Knotfest about ANTHRAX's 40th anniversary (as transcribed by BLABBERMOUTH.NET): "I'm definitely proud of that whole thing. I think it's great that those guys are still going… That was real good memories back then. I know people go, 'Oh, they fucking threw you out after that,' and blah blah blah. But, obviously, I got over that and formed NUCLEAR ASSAULT. And next year we were doing S.O.D. So I'm not the kind of guy who stays bitter forever. But, yeah, the memories of those times, writing that record and recording it and everything was... 'Cause there was no blueprint or anything; we just had influences and just tried to put our own stamp on 'em back then. So, yeah, it kind of sucks being thrown out three days before [it got] released, but it gave me an excuse to do something else."

When interviewer Daniel Dekay noted that it was "really cool" of ANTHRAX to allow Lilker to tell his side of the story in the above-mentioned documentary series, Dan said: "There was times in the past where I might have been a little neglected on some of the stuff. So I think they wanted to make sure to just have a nice, inclusive vibe and not forget any particular details. Like the fact that I wrote 75 percent of 'Fistful Of Metal'. You know, a minor detail."

A number of years ago, Lilker told Voices From The Darkside that he was fired from ANTHRAX due to "a conflict" with the band's then-vocalist Neil Turbin. "He was an egotist (like most singers, haha) and it bothered him that I was taller than him," Lilker explained. "Also, he had no sense of humor, so if you busted his balls he took it seriously. So, he told the other members, 'I can't take Lilker anymore. It's him or me.' They decided he was more important as a familiar frontman to the fans, so they threw me out, even though I wrote 75 percent of the music on 'Fistful…'. Oh well. He was, of course, thrown out seven months later, and I played with Scott [Ian, ANTHRAX guitarist] and Charlie [Benante, ANTHRAX drummer] in S.O.D. the next year."

In recent years, Ian has voiced his appreciation for the role "Fistful Of Metal" played in giving ANTHRAX its start, telling Metal Hammer: "Let's face it, 'Fistful Of Metal' gave us our career. It got the band some attention, made people all over the world aware of what we could do — and for that reason alone I have to be grateful to everyone involved. The record was vital in launching us, and everything we've done, and become, since stems from that debut record. I may be critical of it in some ways, but I could never do anything other than admit we owe it all to 'Fistful Of Metal'. If that had never happened… well, perhaps you would never have heard of ANTHRAX."