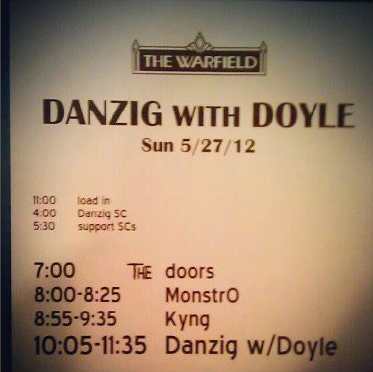 Glenn Danzig is performing his "Legacy" career-spanning set featuring songs from DANZIG, SAMHAIN and MISFITS, in a number of U.S. cities in late May and early June. In addition, he is playing four DANZIG shows where is joined by ex-MISFITS axeman Doyle Von Frankenstein as a "special guest."

Fan-filmed video footage of the Danzig/Doyle portion of Glenn's set from the May 27 concert at The Warfield in San Francisco, California can be seen below.

A "Danzig Legacy" TV special was filmed on Tuesday, May 29 in Glendale, California with director Mark Brooks (Adult Swim's "Metalocalypse").

Glenn Danzig is streaming the track "Devil's Angels" on his official web site. It was originaly the theme song for the late '60's biker film of the same title.

DANZIG is currently in the studio putting the finishing touches on the as-yet-untitled covers record for a late summer/early fall release.