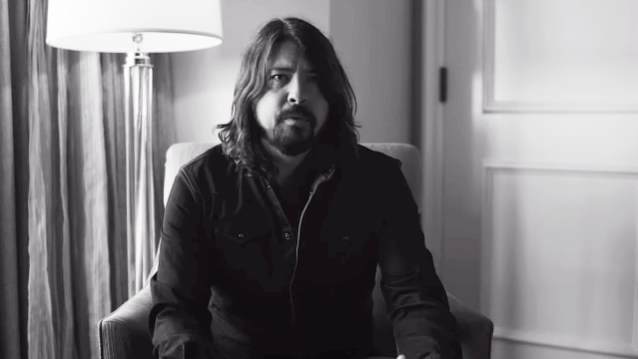 According to The Pulse Of Radio, FOO FIGHTERS frontman and NIRVANA drummer Dave Grohl recalls the first time he ever heard SOUNDGARDEN's 1994 album "Superunknown" in a new video clip posted at the band's official web site (see below). The clip is part of the 20th anniversary celebration of the record, which will also include a deluxe reissue along with select performances of the album in its entirety by the band throughout the year.

In the clip, Grohl says, "[Recording engineer Adam Casper] played 'Black Hole Sun' and I remember thinking, 'Holy shit, this is gonna be huge.' Because, to me, it was the perfect meeting of THE BEATLES and BLACK SABBATH . . . I don't think that had ever successfully been paired until that record, and in particular that song."

Grohl adds, "That record just raised the bar for everyone . . . They were an incredible band. 20 years later, that's one of those records I honestly feel like your kid or your kid's kids will discover and say, 'Wow, Dad, did you know about that band SOUNDGARDEN?' 25 years from now."

Grohl has continued his admiration for the band in recent times, directing a video last year for their song "By Crooked Steps" from 2012's "King Animal" album.

SOUNDGARDEN guitarist Kim Thayil told The Pulse Of Radio how Grohl pitched the idea of the video. "Dave heard the album and loved it, and specifically 'By Crooked Steps'," he said. "He emailed Matt [Cameron, SOUNDGARDEN drummer] and told him how much he and Taylor [Hawkins, FOO FIGHTERS drummer] liked the song. He then, unsolicited, submitted a treatment for the video to Matt. Matt shared that email with the band and everyone cracked up. We said, 'We've got to do this. Let's try this.'"

The 20th anniversary edition of "Superunknown" arrives on June 3 in two configurations, both containing the remastered album, demos, rehearsals, B-sides and more.

SOUNDGARDEN will head out on a co-headlining tour of North America this summer with NINE INCH NAILS, beginning on July 19 in Las Vegas.