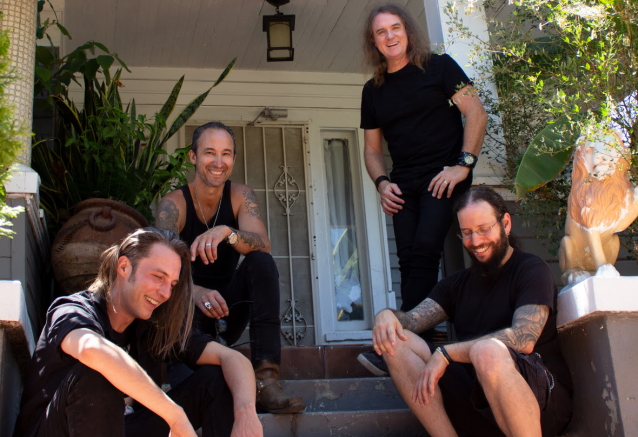 THE LUCID, the four-piece hard rock band featuring bassist David Ellefson (ex-MEGADETH),vocalist Vinnie Dombroski (SPONGE),guitarist Drew Fortier and drummer Mike Heller (RAVEN, FEAR FACTORY),has released a music video for the song "Maskronaut". The clip, which was directed by Michael Sarna, can be seen below. The track is taken from THE LUCID's self-titled debut album, which was released in October via SpoilerHead Records.

In conjunction with the video release, THE LUCID is aiming to raise awareness for testicular cancer after Fortier was diagnosed with the disease last month. He is currently recovering from surgery and waiting to hear results back from pathology as well as next steps.

THE LUCID, along with Brynn Arens (Flipp),has set up a Gofundme page to help Fortier with medical costs during this time.

Fortier states: "You truly never know with these things. I wanted to make this public to help raise awareness with this type of cancer because it literally came on out of nowhere. I'm thankful for all the support and I want to give a big thank you to Dr. Masterson and his team at Indiana University for being true rock stars in their field."

Ellefson adds: "We always felt 'Maskronaut' was a special song, even more so with the video. In light of recent circumstances with Drew's health, we agreed this was the right time to release something uplifting and positive heading into the summer."

"Maskronaut" was produced by Sarna and Ellefson, and apart from the band, stars Kyle and Ashleigh Abbott, along with Alyson Montez.

Ellefson previously stated about the LP: "It's been a real blast making a record with these guys and I must say that it's refreshing to explore some new musical avenues… to step out a bit from what each of us have done stylistically in our own careers. There was an effortless synergy that came with creating these songs together which is always amazing when working with new people. I'm looking forward to everyone checking it out!"

Find more on The lucid