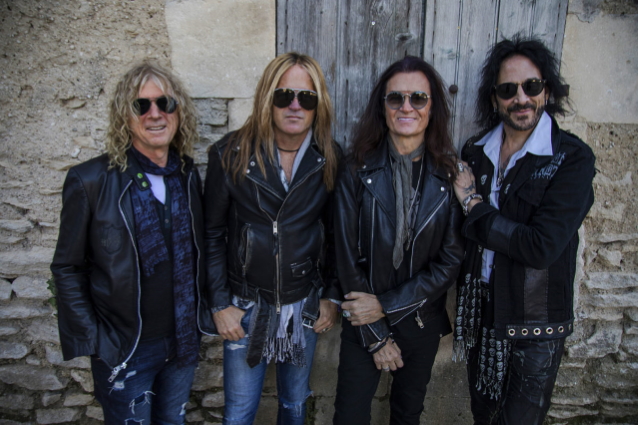 THE DEAD DAISIES' Glenn Hughes and Doug Aldrich have opened up about the recent departure of Deen Castronovo. The drummer announced his exit from the group two days after THE DEAD DAISIES' publicist revealed that Tommy Clufetos (BLACK SABBATH, OZZY OSBOURNE, ROB ZOMBIE, TED NUGENT, ALICE COOPER) will rejoin the band when they hit the road in support of their new album, "Holy Ground". Clufetos previously toured with THE DEAD DAISIES in 2015.

During an appearance earlier today (Tuesday, February 2) on SiriusXM's "Trunk Nation With Eddie Trunk", Aldrich stated about Castronovo's decision to leave THE DEAD DAISIES: "Deen was having a hard time with some back problems. We got together and played in October of last year, and he was struggling — he was having a hard time. And he just said, 'Look, guys, I need to get some work done, and it's gonna put me out of business for a little bit. I know you guys wanna move fast and you've got plans to do things.' So he decided to do that."

Glenn praised Deen, who laid down the drums on "Holy Ground" as well as on 2018's "Burn It Down" LP.

"[Deen] sang on a couple of ['Holy Ground' songs] with me," he said. "I would have liked to have had Deen sing more. We have a great blend together, and you can hear it.

"It's such a shame that he's not with us. But we have to continue. And Tommy was the guy."

Both Doug and Glenn said they were looking forward to sharing the stage with Clufetos, who worked with such rock icons as Nugent, Alice Cooper and Rob Zombie before joining Ozzy Osbourne in 2010. That led to a spot as the drummer on BLACK SABBATH's last two world tours.

"Tommy's an incredible player," Aldrich said. "I'm so excited to hear him and Glenn together. It's gonna be amazing."

Asked if they ever played with Tommy before, Glenn said: "I have not. I've met him a couple of times at Geezer's [Butler, BLACK SABBATH bassist] house. I've seen him play on YouTube, of course."

Added Doug: "I haven't played with him, but I've watched him a lot, especially since him signing up. And, man, it's such a small world, that Glenn played with Tony [Iommi] and Tommy's played with Tony, and that feel is very important, and Tommy's got it. I think it's even gonna be a step deeper with Tommy."

Continued Glenn: "I think it's gonna be way heavier. With all due respect to Deen, who I love, Tommy is meat and potatoes. For me, I'm a [John] Bonham fan, so I've gotta have the meat and potatoes behind me."

"Holy Ground" was released on January 22. Recorded at La Fabrique Studios in the south of France with producer Ben Grosse, the LP is the band's first to feature Hughes, who joined the group in 2019 as its new bassist and vocalist, replacing John Corabi (MÖTLEY CRÜE) and Marco Mendoza (THIN LIZZY).

In 2019, Castronovo, who had recorded and toured with THE DEAD DAISIES for the past three years, played several shows with JOURNEY guitarist Neal Schon under the "Neal Schon's Journey Through Time" banner. Joining them were founding JOURNEY and SANTANA singer/keyboardist Gregg Rolie, bassist Marco Mendoza of THE DEAD DAISIES and THIN LIZZY, a musician named Chris Collins (on guitar and keyboards) and super-producer Marti Frederiksen (multi-instrumentalist, vocals).