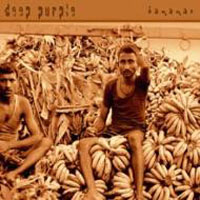 The cover artwork for DEEP PURPLE's forthcoming album, "Bananas", has been posted online at this location. The group are performing two songs from the album during their current European tour: "I Got Your Number" (a partially rewritten version of "Up The Wall", which was played on last year's February U.K. tour) and a slowie called "Haunted", which is planned as the first single from the album, due in Europe on Aug. 25. EMI Records are promising a vinyl edition of "Bananas", the first new release on this format in ten years. But before vinyl collectors get too excited, it will probably only be pressed if they get enough interest from shops.

In other news, DEEP PURPLE guitarist Steve Morse will make an appearance at the Gibson Presents Muriel Anderson's All Star Guitar Night in Nashville, Tennessee, on July 18. This momentous musical occasion marks the first Nashville appearance in 25 years by legendary guitar innovator and musician Les Paul, who will perform a number of his groundbreaking songs and share the stage with a number of great guitar stars, including Steve Morse.

Thirteen-year old guitarist Chelsea Constable's performance at All-Star Guitar Night will be filmed for an upcoming series, "VH1 Prodigies". Director Peter Gilbert will capture a special moment when the six-string wunderkind jams with her idol, Steve Morse. The show is expected to air in late summer.