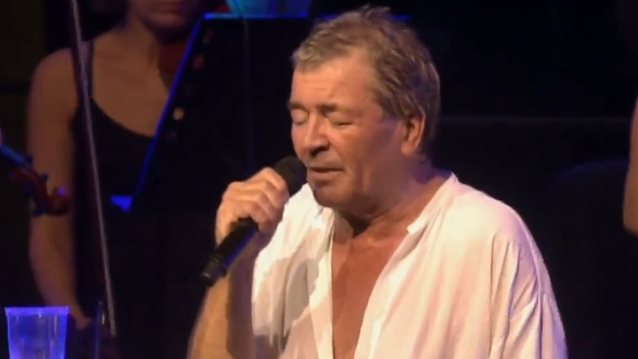 In a brand new interview with RollingStone.com, DEEP PURPLE singer Ian Gillan was asked if he is upset that his band has not yet been inducted into the Rock And Roll Hall Of Fame despite the fact that it has been eligible since 1993.

"Whatever you say to a question like that, you sound supercilious or dismissive or disgruntled or sour grapes," he replied. "I spent all my younger life trying to avoid institutionalization as much as I could and then I realized that these sorts of things are for your family and fans. So I don't mind what happens. We're grateful for anything that comes along our way.

"I think it would be undignified for us to enter the fray and stamp our feet and say, 'Yeah, we don't need it anyway.' It's really an American thing. We don't really understand it, but if I treat it with respect, we'll see what happens. That's all I can say."

Asked if he would be willing to play with DEEP PURPLE's founding guitarist, Ritchie Blackmore, at the ceremony if the band was inducted, Gillan said: "Well, we are the living, breathing DEEP PURPLE. This is the longest that any lineup has ever been together in this band. And it would be unconscionable to think about bringing Ritchie in. I don't have an issue with Ritchie, nor does anyone. I've been in touch with Ritchie recently and everything's cool, so there's no bitter, personal problem. We're too old for that and everything's in the past, but no. That would be out of the question. How insulting that would be to [current guitarist] Steve Morse, for example? So if that's the stumbling block, fair enough. Never the twain shall meet."

He added: "I'm saying what I'm about to say not to wind Ritchie up, if he's reading this. He knows that we've got to talk about these things. So I say this with no rancor, and let's get the record straight: I was just as much of an asshole as Ritchie was. But Ritchie carried it on for a little longer. Had Ritchie stayed with the band, it would have been all over. It would have just ended. Without any doubt in anyone's mind — it was all over. So the day he walked out was the day we had to rebuild. We had Joe Satriani for one year, and he got us over the crisis, and then we got Steve and started to rebuild. Within a couple of years, we started playing arenas again, and it's been fantastic ever since.

In a 2012 interview with Billboard, Blackmore said that he had no interest in participating in any Hall Of Fame celebrations, whether DEEP PURPLE was inducted or not.

"Personally, I couldn't care less [if DEEP PURPLE is inducted]," the guitarist said. "I would never go. I'm not really a fan of that stuff. Considering some of the people that are in the Hall Of Fame, I'm not sure if it's a good idea, so I don't care one way or the other, actually."

Blackmore left DEEP PURPLE for good in 1993 after a second stint with the group. He has since spent most of his time recording albums and performing select concerts with his current project BLACKMORE'S NIGHT, his Renaissance and Medieval music collaboration with his wife Candice Night.