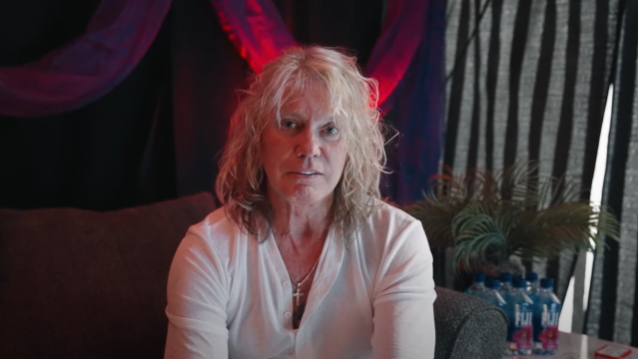 DEF LEPPARD Bassist RICK SAVAGE: 'I've Got The Best Job In The World'

DEF LEPPARD has released the sixth in a series of behind-the-scenes episodes from "The Stadium Tour", which kicked off on June 16 in Atlanta, Georgia. Episode 6 takes you to the stages at Detroit and Hershey, and shares more guitar stories, a new song on the setlist, singer Joe Elliott's performance of "Pour Some Sugar With Me" with Billy Joel, and more.

In the five-minute clip, which can be seen below, bassist Rick Savage — known to all simply as Sav — reflected on the Detroit gig, saying: "Wow, Detroit. What a show. The crowd was fantastic. There was just a great energy about the set. Just within the stadium, from the get-go, right from the start, it was, like, bang! And we were with the crowd. The crowd with us all the way. And it just kept going like that — it just kept going up and up and up and up."

"Playing in a band like this is just fantastic. And every so often you have a night like tonight that just jogs your memory and [you] go, 'I've got the best job in the world.' And it was because it was fantastic."