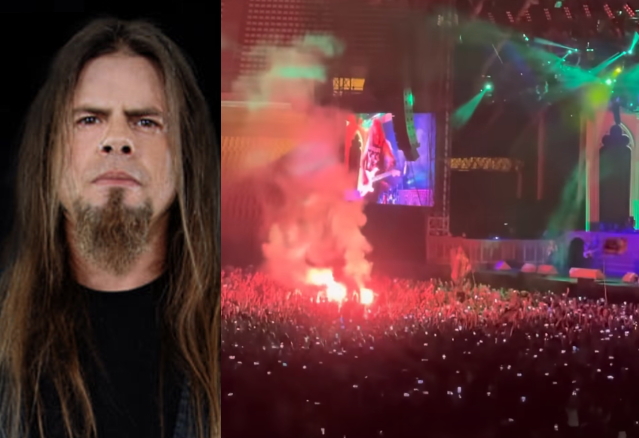 QUEENSRŸCHE frontman Todd La Torre says that lighting flares at stadium concerts and soccer games is a "very common" thing for the people of Greece and is meant to be a "celebratory" gesture.

The 48-year-old Florida-based musician, whose wife hails from Athens, offered his comments just two days after IRON MAIDEN singer Bruce Dickinson blasted a fan as a "Greek cunt" and a "fucking cocksucker" for lighting a flare during the band's concert in the Greek capital.

Earlier today (Monday, July 18),Todd took to his Twitter to share a video of the MAIDEN show and wrote in an accompanying message: "For those that don't know, lighting flares at open stadium concerts, big soccer games, etc, is a VERY common thing for the Greek people. It is a celebratory thing." He then added in Greek: "The Greeks are crazy!"

Todd later took to the BLABBERMOUTH.NET Facebook page to clarify his original tweet, writing: "Many people hadn't realized that this was not an isolated incident but rather a cultural celebratory behavior, thus I only stated it as information. I never expressed an opinion for or against it.

"Much appreciation to those who clearly understood the tweet exactly as it was written, instead of having mistakenly interpreted it as a position taken."

The incident at the MAIDEN concert occurred as the band launched into the tenth song of its set, "The Number Of The Beast", at the Olympic Stadium. After singing the opening line of the track, Bruce noticed the flare lighting up and immediately burst into an angry rant, apparently concerned that the smoke from the flare would negatively affect his singing voice.

"The cunt with the fucking flare, I've gotta sing up here," Bruce shouted into the microphone. "You fucking cocksucker. You Greek cunt. All right. I've gotta fucking sing. All right. Fuck you."

As Bruce's bandmates continued playing the opening riff of "The Number Of The Beast", he apparently briefly left the stage in hopes that the smoke would clear up. However, when Dickinson eventually resumed singing the song, he was notably off time and not in sync with the rest of the group.

Dickinson has a history of publicly admonishing fans and security at MAIDEN's concert if he feels like they are out of line. Back in 2019, he stopped a MAIDEN show midway through to slam a Tacoma, Washington venue for a violent and bloody incident in the crowd for which he claimed the venue's security was to blame. In 2012, Bruce called out a fan at a Indianapolis show who had been texting for three straight songs.

Last year, Todd told The Vinyl District that Athens was his favorite city in the world to perform in. "My wife's from there and that's kind of my home away from home," he explained.

QUEENSRŸCHE's 16th studio album, "Digital Noise Alliance", will be released on October 7 via Century Media Records. The record was once again helmed by Chris "Zeuss" Harris, who previously worked with QUEENSRŸCHE on 2015's "Condition Hüman" and 2019's "The Verdict" LPs.

La Torre joined QUEENSRŸCHE a decade ago as the replacement for original frontman Geoff Tate. He was also the lead singer for CRIMSON GLORY from late 2010 until resigned from the band in early 2013.

For those that don't know, lighting flares at open stadium concerts, big soccer games, etc, is a VERY common thing for the Greek people. It is a celebratory thing.
Οι Έλληνες είναι γαμάτοι!https://t.co/ps9IsIBdgL