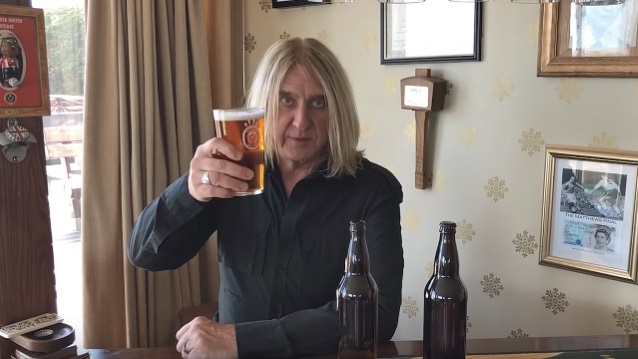 DEF LEPPARD-Branded Beer To Be Unleashed For Tour With JOURNEY

Def Leppard Pale is what happens when a mega British rock band collides with an American craft brewery. Both fanatics of their craft, DEF LEPPARD and Elysian Brewing are excited to blend their worlds together, music and beer.

The beer was brewed to fuse the infamous malt bodies of British ales with the mysteria of Pacific Northwest hops. Def Leppard Pale will be unleashed for the massive co-headlining DEF LEPPARD and JOURNEY 2018 tour. The beer will be on sale starting May 23 (the second tour stop at Times Union Center in Albany, New York) and is available in 16oz cans and on draught at most concert venues and select restaurants, bars and pubs near the venue. The can was designed in tribute to the 30th anniversary of DEF LEPPARD's landmark album "Hysteria".

As for whether Def Leppard Pale will have a life beyond the JOURNEY tour, Elliott says: "There's no cut-off time on this. If it takes off and people like it, it can be around. IRON MAIDEN has a beer named Trooper and they've done really well with theirs. We have to see if we can match that. It’s been around five years or so by now, so there's a long way to go to keep up with them and all these other people [with branded alcohol such as] Jimmy Buffett. We don't know what kind of legs it's going to have — come back to me in a couple years on that one, I'm not gazing into a crystal ball right now."