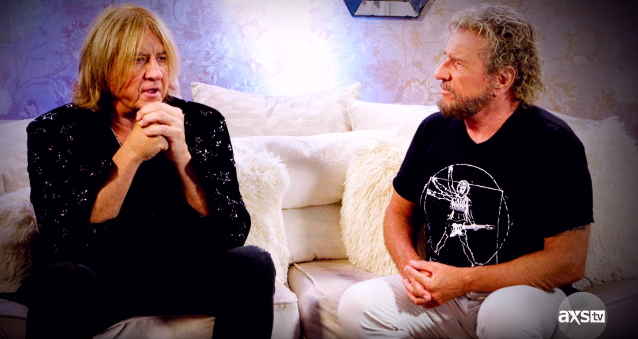 AXS TV recently announced that the network's popular music interview series "Rock & Roll Road Trip With Sammy Hagar" will premiere its fifth season on Sunday, April 19 at 8:30 p.m. ET/5:30 p.m. PT. The season features six all-new episodes, kicking off with a stop in Las Vegas where rock superstar Sammy Hagar checks in on his world-famous eatery the Cabo Wabo Cantina, and receives the key to the city. After that, Hagar sits down with Shaquille O'Neal at the Lakers great's Big Chicken restaurant, and closes out the day with a jam session with hard rock pioneers DEF LEPPARD during their residency at Planet Hollywood.

A preview clip of the first episode, featuring Hagar's interview with DEF LEPPARD singer Joe Elliott, is available below.

Then, on April 26, Hagar visits his hometown of Fontana, California, where he catches up with Grammy winner Rob Thomas and the duo take the stage to deliver a powerhouse performance of Thomas's mega-hit "Smooth" in front of a roaring crowd. And, on May 3, The Red Rocker (Hagar) meets the Motor City Madman, Ted Nugent, for a unique road trip featuring a wild ride on a four-wheeler and a lesson in archery, before sitting down for a lively chat in Nugent's living room followed by a jam on the classic hit "Jenny Take A Ride".

Other season five guests include country music superstars BIG & RICH on May 10; quintessential QUEEN guitarist Brian May, multi-talented guitar virtuoso Joe Walsh and Grammy-winning country artist Tanya Tucker on May 17; and hard rock mainstays EXTREME, along with former VAN HALEN frontman Gary Cherone on May 31. The series will return later in the year with six additional all-new episodes, once production can safely commence again due to the coronavirus outbreak.

"We have an absolute blast producing this show each year, visiting incredible locations to sit down with some of the most legendary entertainers of all time," Hagar said. "This is a dream come true for me, traveling the country to hang out and play music with my friends, and I am excited to show our fans all the epic things we have planned in season five. The first six episodes include great jam sessions and conversations with some truly talented entertainers, and I already cannot wait for production to start back up again so we can get out there and film this next batch of epic episodes."

"'Rock & Roll Road Trip With Sammy Hagar' has been an audience favorite since it first debuted on AXS TV," said Anthony Cicione, general manager of AXS TV. "A big reason for that is Sammy Hagar himself, whose genuine enthusiasm, easy charm, and undeniable passion for music and the artists who make it fuels each and every episode. This series has boasted incredible performances and candid moments from some of the biggest names in music history, and we look forward to bringing our viewers even more lively conversations and unforgettable jam sessions when 'Rock & Roll Road Trip' returns on April 19."