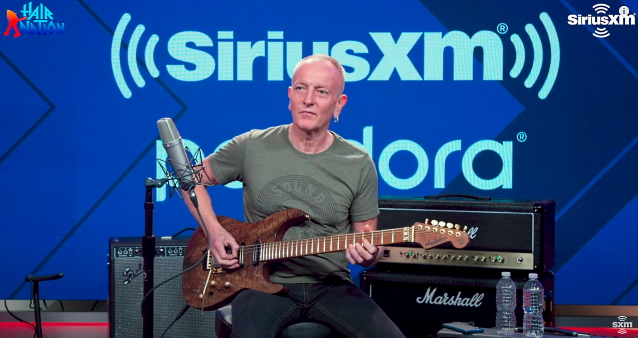 SiriusXM's YouTube channel has been updated with a new video of DEF LEPPARD's Phil Collen teaching you how to play the band's iconic hit song "Pour Some Sugar On Me" on the guitar. Check it out below.

Released in 1988, "Pour Some Sugar On Me" peaked at No. 2 on Billboard's Top 100 singles chart and started an explosion of over a million copies of the "Hysteria" album to be shipped in a single day.

"The Early Years 79-81" box set represents the band's first two albums, "On Through The Night" (1980) and "High 'N' Dry" (1981),and has been prepared in conjunction with Elliott who has acted as executive producer on the set. The mastering has been done by the band's long serving sound engineer Ronan McHugh.

DEF LEPPARD is scheduled to hit the road this summer as part of "The Stadium Tour" with MÖTLEY CRÜE, POISON and JOAN JETT & THE BLACKHEARTS. The trek is slated kick off on June 18 in Jacksonville, Florida and will mark CRÜE's first live dates since wrapping its 2014/2015 farewell run.