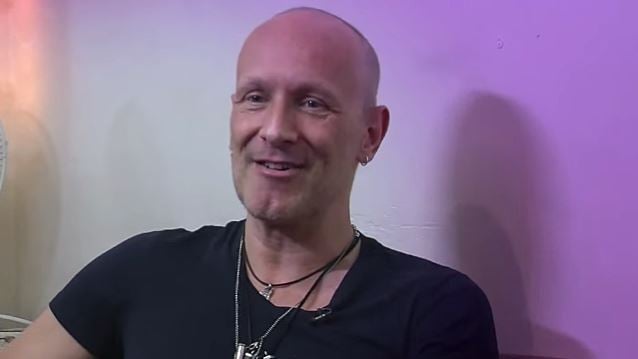 DEF LEPPARD's VIVIAN CAMPBELL On Battle With Hodgkin's Lymphoma: 'I Seem To Be In A Good Spot At The Moment'

During a a brand new interview for VH1 Classic "That Metal Show" co-host Eddie Trunk's podcast, "Eddie Trunk Podcast", DEF LEPPARD guitarist Vivian Campbell was asked how he is doing after undergoing stem-cell treatment in his continuing battle with Hodgkin's lymphoma.

"Well, I seem to be in a good spot at the moment," Vivian responded. "You can never be too certain with these things, 'cause they can come creeping back. But after three rounds of chemo over the last two years, I did a stem-cell transplant in October. And the first [post-transplant] PET scan that I did on New Year's Eve came back really, really good — there's no sign of the tumors — so I'm hopeful that we're on the right path. I mean, that's certainly the way I've been thinking. I'm not letting it concern me at all. But continuing for the next few years, I'll be doing more scans and follow-ups and stuff, just to make sure, but I'm certainly feeling healthy, you know?!"

Campbell also spoke about what it was like to find out last year that his cancer had returned after first announcing in November 2013 that he was in remission.

"For anyone who knew anything about cancer, they'd probably say, 'Well, that's not unusual,'" he said. "But I didn't. I got my diagnosis in the spring of 2013 when we were doing the Las Vegas residency with DEF LEPPARD. And as soon as we were done with that, I started six months of chemo. And I just kind of naturally assumed you do the chemo, you do a scan at the end of the chemo and it shows that you're good, and that's it. But apparently not. It was, like, ninety-something percent gone, and it was what they couldn't see on the scan that came creeping back. And it came back so fast. That's why the doctors advised me to do the stem-cell transplant — to try and kill it at the microbiological level. So it's pretty much rocket-science stuff; I mean, it's amazing technology. I personally feel pretty good about this right now. I feel that it's gone. But, like I said, you never really know, and you've gotta keep your eye on it. If it's gonna come back, it's gonna come back in the next couple of years. But hopefully not, you know?!"

Asked if he has had an opportunity to speak with some of his fellow musicians, like BLACK SABBATH guitarist Tony Iommi, and other people who have gone through similar ordeals, Vivian said: "Funny enough, actually, I think that Tony Iommi and I have the same cancer — Hodgkin's lymphoma — as far as I know. But obviously I don't know what stage his was at. Now I don't know Tony personally, so I haven't talked to him about it. But I've talked to a lot of people. It's amazing. Even just through my Facebook page. I mean, you put this kind of stuff out there, and I personally was amazed by how rampant it is, how many people have been affected by it to some degree, or people that are close to them in their family. I've had a lot of advice, but to be honest, I'm just pig-headed and Irish, and I just do my own thing. The main thing for me was to continue working, and in fact, to continue my life unabated, and to not let it compromise me as much as possible. And I think that's been a big part of my mental recovery on this."

Campbell — who before joining DEF LEPPARD in 1992 was well known for his work with DIO and WHITESNAKE — went public with his Hodgkin's lymphoma diagnosis in 2013.