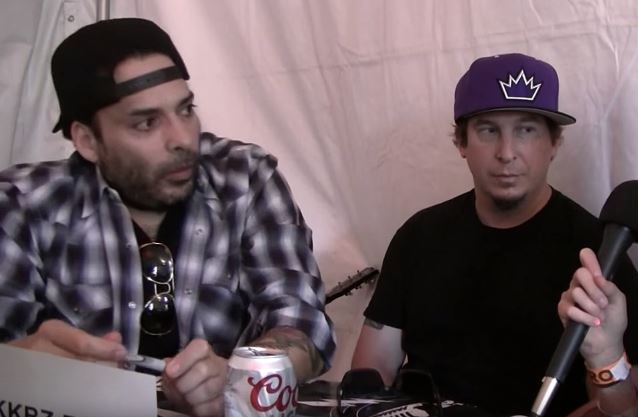 Izzy of the 105.1 The Blaze radio station conducted an interview with DEFTONES drummer Abe Cunningham and turntablist/keyboardist Frank Delgado at this past weekend's Aftershock fetival in Sacramento, California. You can now watch the chat below. A couple of excerpts follow (transcribed by BLABBERMOUTH.NET).

Delgado: "It's being mixed now. It started being mixed a couple weeks back. They're actually going tomorrow to go down and listen to mixes and do things and… We're mixing and we still are in the process of [finalizing the] album title, artwork, songtitles. We haven't even got there yet. But the music's done."

On the writing and recording process for DEFTONES' new album:

Delgado: "You know what's cool? We had some [release] dates that were already kind of tentative. But we were [putting the finishing touches on the album] and the label actually came in. They were, like, 'Hey, guys, for the first time ever, you guys wanna just take your time, make it right, and then we'll release it in the first [quarter] of the year?' And we were, like, 'Wow! Yeah. That sounds great.' And that was actually how we wrote the record. We would go and we'd meet up in L.A. and we'd write for, like, two-three weeks, we'd go home for a week or two weeks, and we'd go back to L.A. and write for a month, then go home for three weeks. So it was very relaxed and very chill. Then we'd do a couple of shows in between all that, and then we were ableto jam our ideas on soundcheck. And we have never done it like that. Usually we'd be, like… They'd say, 'You need a record out at this time.' And then you're, like, 'Oh, shit! We've gotta go in the studio.' Now you've gotta be creative and turn it on within this short amount of time, and write and record. But this one's been hella cool, because it's been at our own pace, at our discretion, and it's been different and really good. And it works for us too, especially now at this time in particular for who we are as musicians and men. A lot of the guys got kids and families, so it worked out for that part of the thing really well."

Speaking about the new album's musical direction, DEFTONES singer Chino Moreno told a radio station this past summer: "Every time we make a record, our main focus, with anything, is to try different things, and try things maybe outside our comfort zone a little bit. But this time, this record, one thing that's really cool, sonically, is that our bass player [Sergio Vega] is really not so much playing… He does play bass on some of the record, but [on] a lot of the record he plays a Bass VI, which is a six-string bass, which is more like a baritone guitar, sort of. So the way his frequency works with my guitar frequency and Stephen's [Carpenter] guitar frequency, it kind of [gave] it a different sound."

Chino also talked about the songwriting process for the follow-up to 2012's "Koi No Yokan". He said: "It's never easy, I don't think. I think we found better ways to work nowadays. We used to have our own studio in Sacramento, and we didn't have set hours or anything like that. We would show up at the studio at eight o'clock at night, and we'd get there, and we'd have no focus. I mean, we'd sit there for two hours watching 'Lost'… Seriously, we would just waste a lot of time, and by the time we'd start playing our instruments, it was midnight or one o'clock in the morning. We were taking three years sometimes to make records. And I attribute that to a lot of different things, but that was one of the main things. A couple of records back, we adopted this [routine] of going in at this hour — we start at noon and we end at five. And the room that we actually write in is pretty small, so while we're in there, we wanna be actually doing something productive. We just need to create, create, so we can get out of here for the day, and then listen to whatever we did the next morning, come [back] in, and do it again. We did, like, ten days, two weeks of writing sessions — going in and spending six days a week just doing that. We all live apart now — a couple of guys live in Sacramento, I live in Oregon, one guy lives in New York, and one guy lives in L.A. So, yeah, we all kind of fly in to meet at a certain spot and just work. And we all kind of go back to our little hideouts and come back and meet again. So it's kind of cool."

According to Moreno, sixteen songs were written for DEFTONES' new CD, which was once again produced by Matt Hyde (SLAYER, CHILDREN OF BODOM, MONSTER MAGNET, WINDS OF PLAGUE). The effort will feature a guest appearance by Jerry Cantrell (ALICE IN CHAINS).