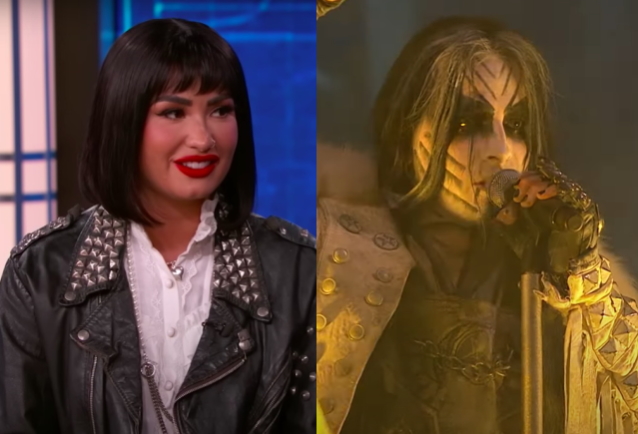 During an appearance on "Jimmy Kimmel Live!" this past Thursday (July 14),pop singer Demi Lovato spoke about her experience going to see Norwegian symphonic black metal band DIMMU BORGIR a decade and a half ago.

"There was this band called DIMMU BORGIR," she said. "And I went to their show [in 2007]. They were like a Norwegian black metal band or something. And I was at the show, and I just happened to be in the center, where the mosh pit happens. But everyone — they were, like, grown men, and I was this 14-year-old girl. So I had to climb my way out and crowd-surf to the front of the stage. And I lost my shoe. It was a great time."

She added: "I loved moshing because you could just get your aggression out and nobody cares."

In a 2008 MTV interview, Lovato named LAMB OF GOD, JOB FOR A COWBOY, ABIGAIL WILLIAMS and DIMMU BORGIR as some of her favorite bands.

"It's so completely different from anything else," Lovato has said of her love of metal. "You've got vocals that I can't do, the double bass drums, the incredible guitar solos … every part of the band does more difficult stuff than your average rock band does. I listen to these bands, and I wish I could do all of that, but I can't."

Nita made her live debut with Demi with a performance of Lovato's new single, "Substance" on "Jimmy Kimmel Live!".