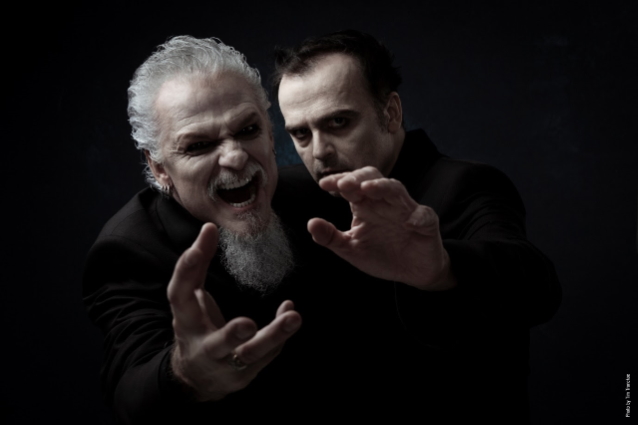 The official music video for the disc's third single, "Wolves In Winter", can be seen below. The clip was directed by Ivan Čolić and produced by iCODE Team.

Schaffer comments: "I'm not sure why the title of this song came to me so strongly when I wrote and arranged the music. But it certainly did. I even put the wolves howling part on the pre-production demo before I had written any lyrics or heard any vocal melodies from Hansi.

"It is about embracing the beast that lies within us all. At any rate, it's a cool song with a big hooky chorus. My favorite part is the verse riff, though. It just sounds heavy and intense, and you can't go wrong with that combination."

Kürsch adds: "'Wolves In Winter' is definitely a tune you want to hear live and even more than hearing it, you want to sing along with it immediately. Feel free to rehearse in front of your speakers!"

During a press conference at last year's Hellfest, Jon stated about the songwriting process for "III": "At the end of [ICED EARTH's] 'Incorruptible' album cycle, I went out to the mountains in Arizona and hiked for a month and spent one week with my [ICED EARTH] bandmates, because we were going on hiatus. So the five of us went out into the desert and stayed together, and then I stayed three weeks by myself and got an enormous amount of power from that and energy from just staying away from the music business and not talking to management. I talked to Hansi about twice, and other than that, I was completely disconnected from everybody, and it was a really great thing. So when I got back to songwriting, it was, like, 'Boom!' Everything went really fast, and I knew there was really, really strong material, and it's good. And the arrangements came, and everything came, and I started sending Hansi stuff. I knew, from an instrumental standpoint, that this is some of the best material I've ever written. And then when he added his stuff on top, it was, like, 'Okay, we have something really special for the people.' And at the end of the day, I actually don't care if you guys love it, because I do, and [Hansi] does. And that sounds harsh, but that's art, and it's honest — it's actually honest. And it's real, and it is actually some of the best material I've written in my entire life, from my standpoint, and what [Hansi has] done, it's killer. And people are gonna be shocked, I think — very pleasantly shocked — by what's coming, honestly."