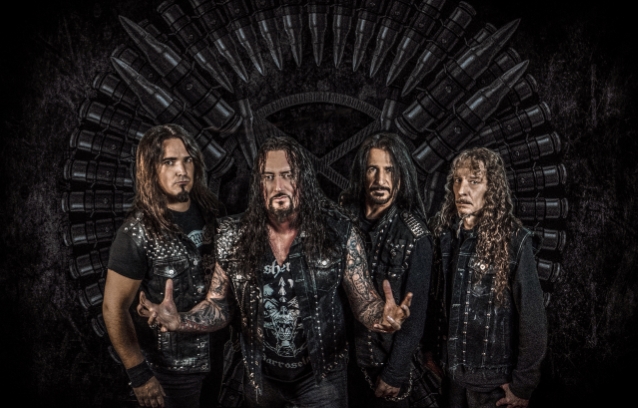 Today, the band has unleashed the visualizer video for the first single and vicious title track, "Born To Perish".

Frontman Schmier states: "The title track was the first song we wrote for the new record and it definitely shows the strength that DESTRUCTION has in 2019. It immediately set the bar high for the rest of the album. It features everything that we stand for: speed, picking, variety and punch. Randy came up with some very cool drum patterns and Damir offered up a really crunchy solo part, so both new members are heavily involved here!"

Guitar player Mike adds: "We started the song with some drum patterns that Randy gave us and adjusted some riff ideas we had. It was a nice challenge to write some tight right hand picking for a 212 beats per minute song. As a guitar player this is close to my speed limit, especially on the triplets — great fun to play though!"

Gyula stated: "Schmier wanted to get a simple and different image than my previous DESTRUCTION covers. When we discussed the new concept, I was happy with this approach because I had the chance to use a different tool, no painting but ink-drawing style.
"When the band mentioned the album title, I got the idea of a crest composition without the typical brave lion or eagle but vultures with two heads and we filled the image with several symbols.

Schmier added: "We wanted something basic this time. I had something like an emblem in mind, a stamp, a DESTRUCTION coat of arms.