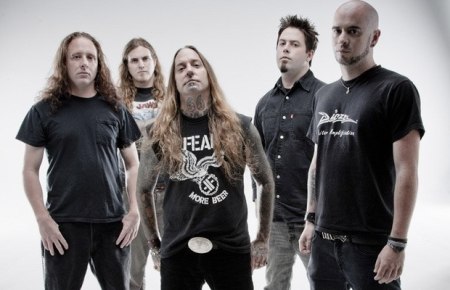 Vic Firth artist John Boecklin of Santa Barbara, California metallers DEVILDRIVER is featured prominently on the Vic Firthweb site in a video interview. John talks about his history with the band as well as the recording of the group's new album, "Beast". You can now watch the chat below.

"Beast", the fifth album from DEVILDRIVER, sold a little over 11,000 copies in the United States in its first week of release to debut at position No. 42 on The Billboard 200 chart. Released on February 22 via Roadrunner Records, the CD was recorded at Sonic Ranch studios in Tornillo, Texas with producer Mark Lewis (TRIVIUM, CHIMAIRA, ALL THAT REMAINS) and was mixed by acclaimed British producer Andy Sneap (MEGADETH, EXODUS, MACHINE HEAD, NEVERMORE, ARCH ENEMY) at his Backstage studio in Derbyshire, England. The band recorded 14 songs during the "Beast" sessions, with 12 tracks making the standard version of the CD and all 14 songs appearing on the special edition.