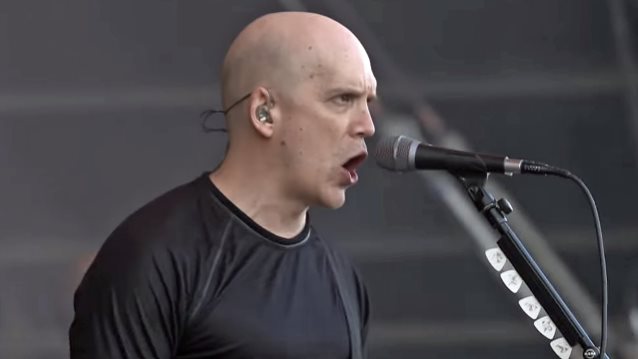 DEVIN TOWNSEND: 'When I Made Angry Music, It Was Horrible Music'

Poland's E-GitarzystaTV recently conducted an interview with Canadian musician and producer Devin Townsend. You can watch the full chat below. A few excerpts follow (transcribed by BLABBERMOUTH.NET).

On how he approaches the guitar in terms of songwriting:

Devin: "I love guitar. I have played guitar for thirty-five years. And when I was a teen, like probably you and probably like most of us, I practiced twenty hours a day, arpeggios and scales and all that. I accumulated a certain amount of technique and I still retain a lot of that, but I stopped, I think at a certain point, when I began to become more interested in making a song that inspired me to feel a certain way. For example, I used to, on a rainy day, I would like to turn on the echo and try to find a selection of notes that reminded me of this experience. And, typically, those experiences, even if it becomes more abstract, like love or hate or whatever, doesn't require much technique. You can play them with very simple chords. So, I think when my interest became more based on trying to put across emotions, I ceased to be interested in technique and then when I got the Steve Vai gig [in 1993], he was so much better than me, I was like 'I don't need to do that. I don't need to learn to do that.' Because what he does and the function of the guitar within his world, was much more to be 'lead-voice.' As a singer, I didn't need to do that. I didn't desire to do it after that point. I found that guitar now, serves a functional purpose as a tool for me."

On eliciting certain emotions from himself and his audience:

Devin: "The way I look at music is because I think I'm emotionally stunted in real life, I feel like I've always been unable to really participate in emotion. Ever since a young age, music was a loophole for me. Through that, I felt like I had a release and an avenue to express things that were really visceral. Like, when I made angry music, it was horrible music. When I make beautiful music, it's really pretty. When I make complicated music, it's really complicated. My objective is I'm not trying to make it complicated or pretty, I'm just trying to react to things I think in my normal life, I'm not adapt at expressing authentically. When it comes to music, I don't give a shit if people like what I do, but I think the only litmus test for whether or not what I'm doing is any use is whether or not I feel something from it. I think that requires getting to know yourself and as you age, being prepared to accept your weaknesses and allow yourself to be vulnerable because I think at that point, what you're participating in emotionally with your music is something that is going to resonate with others. Ultimately that's what this is, we're trying to communicate with other people. It isn't a contest. There's only one of you; there's only one of him; there's only one of her; there's only one of me. It's like we all got the ability to dig deep to say something that is primal."

On how he approaches his career as a professional musician:

Devin: "What you have to do, is you have to learn to compartmentalize all aspects of what it takes to do a professional job as a musician. That means a number of things. Being creative, you have to find ways to compartmentalize your creativity so when you have time to do it, you can bring up those ideas, which involves a lot of documenting ideas that may come to you in periods of your life when you're not able to articulate that sort of creativity. All those sorts of things that come with the artistry of it. You have to be able to put it into a box because the time has come and gone where you can rationalize just being an artist. It just doesn't work. You also have to be a businessman. You have to be the CEO of your own world. Above and beyond that, you have to take care of your mental health. And your mental health in an environment which is fundamentally absurd. Like to be in a position where you are the focus of such attention and a lot of that attention is emotional attention, whether or not it's bad or good, but it's usually projected. You become essentially, the focal point of something that is not something that people are usually trained or there's much of a support network to do. So your mental health is a huge part of it. A lot of that comes down to, for me, having relationships, working on relationships, having people in my life that I've had for a long time. Kids, wife, friends, family. Ultimately at the end of this job, I just want to make sure if it ended tomorrow, my buddies would still help me move. [Laughs] And they would."