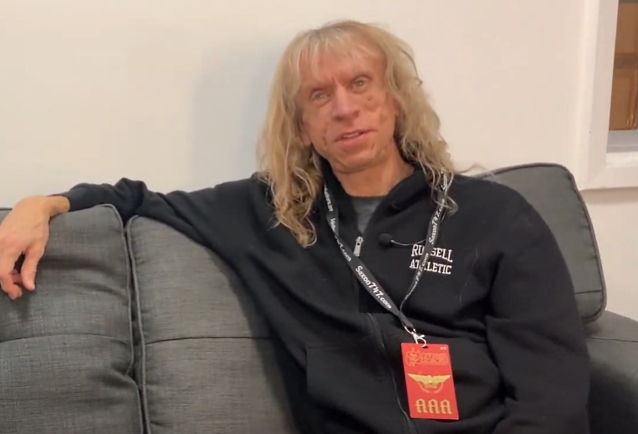 DIAMOND HEAD influenced a slew of early '80s thrash metal bands, in particular METALLICA, which recorded "Am I Evil?" as a B-side to their 1984 "Creeping Death" single and again included on the band's multi-platinum 1998 covers album "Garage Inc." METALLICA would record three additional DIAMOND HEAD songs: "Helpless" ("Garage Days", 1987),"The Prince" ("One" single B-side, 1989) and "It's Electric" ("Garage Inc.", 1998).

In a new interview with Denim And Blether, DIAMOND HEAD guitarist Brian Tatler was asked what it's like for him to see METALLICA still performing his songs. He responded (as transcribed by BLABBERMOUTH.NET): "Well, it's been going on for a long time. At first, back in 1984, I didn't think it was gonna be such a big deal, because they were on a small label called Music For Nations. And they'd only been over to the U.K. to play the Marquee [club in London], and things like that. To me, they were still Lars's [Ulrich, METALLICA drummer] band. I knew Lars, but I'd never met the others. And they covered 'Am I Evil?', and we just thought it was very, very flattering; they'd done a great job. But I didn't expect them to become the biggest metal band of all time. And the income that sales of that song on their record would generate, I had no idea that it would help provide me with income for years and years to come. So it's been an incredible bonus, if you like, for DIAMOND HEAD, and especially for myself and Sean [Harris, original DIAMOND HEAD singer] as the writers."

He continued: "We still play 'Am I Evil?' live, and it still goes down. And I think people don't care if they got into DIAMOND HEAD through METALLICA as long as they got there in the end. A lot of people know that song through METALLICA, and it doesn't bother me in the slightest. It's just a good song, and it's incredible that it's lasted the test of time — over 40 years old, and people still seem to love it. So I'm lucky to have a song like that in the set. And we also do 'The Prince' and 'It's Electric' and 'Helpless'. So the four songs that METALLICA covered are a big part of our set, obviously."

Two months ago, Tatler admitted to Metal Pilgrim that he "may have looked elsewhere for employment" if METALLICA hadn't covered DIAMOND HEAD. "I think it would have been harder to keep DIAMOND HEAD going without that introduction to their fanbase," he said. "'Cause that record sold millions of copies — versions of 'Am I Evil?' have sold millions of copies through METALLICA — and so so many more people know DIAMOND HEAD thanks to Lars and Co. And it may be that a lot of the opportunities that we get now would not be there without that METALLICA connection. So I'm eternally grateful. Obviously, myself and Sean [Harris, original DIAMOND HEAD singer] still get writers' royalties, but even so, I just think it's helped DIAMOND HEAD as a name and a brand to get on more and more opportunities — get festivals and supports. Because they link it with METALLICA; they think, 'Okay, well, you're potentially tapping into a huge market.'"

Two years ago, Tatler said during an episode of "Tatler's Tales" about METALLICA's cover versions of his band's classic songs: "They're great. They're always more powerful and a little faster than the DIAMOND HEAD versions. I mean, they're a great band. They [have] their own sound. Of course, it was very flattering. The first song they covered was 'Am I Evil' They were the first band that ever covered a DIAMOND HEAD song. And it came out in 1984; it was on the 'Creeping Death' 12-inch single, which was on Music For Nations. And I was just really flattered that 'Lars's band' had covered one of our songs and done such a respectful job and worked out the guitar solo. Everything was really good — really close to our version, but a bit more modern, a bit tougher, [with] more attitude."