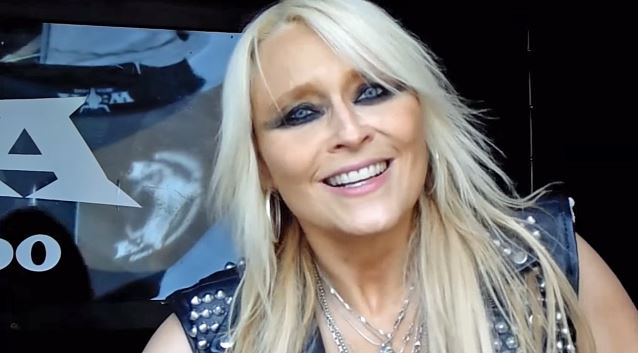 On July 26, Planet Mosh TV conducted an interview with German metal queen Doro Pesch at this year's edition of the Steelhouse Festival at Hafod-y-Dafal Farm, near Ebbw Vale in South Wales. You can now watch the chat below.

Asked when fans can expect to hear the follow-up to her 2012 album "Raise Your Fist", Doro said: "We will finish a new DVD. That's the 30th-anniversary DVD. The whole year we filmed. And it's called 'Strong & Proud'. That will be released in March next year, I think the 4th of March. And we're working on a new album, but [it will be] maybe one more years until it's all done."

She continued: "We were on tour and on the road non-stop. When you're doing a festival or when you're playing a gig, I always concentrate on making the people feel good that day and you are in a totally different mindframe to do a record. I have to take a little time off touring. But touring is, to me, the best — I love it the most. But we have some great songs in the making. So maybe this year we wanna put out a single. I think there's a killer song. I wanna do a video of that song, maybe like a little mini-movie or something. Since I'm from the '80s, I want all these big videos, and maybe we have to do some crowdfunding or something, because nobody wants to have a video anymore. I think the record company doesn't want [to pay for it]. But I wanna do it. I think the song calls for [a video like that]. So maybe [we'll release] an EP or a single this year. But next year [we'll put out] the [full-length] record, and a DVD. And there'll be a live CD as well and three DVDs, or two Blu-rays. So it's a big thing, [with], any guests. Of course, Biff [Byford] of SAXON is on it. And so many friends."