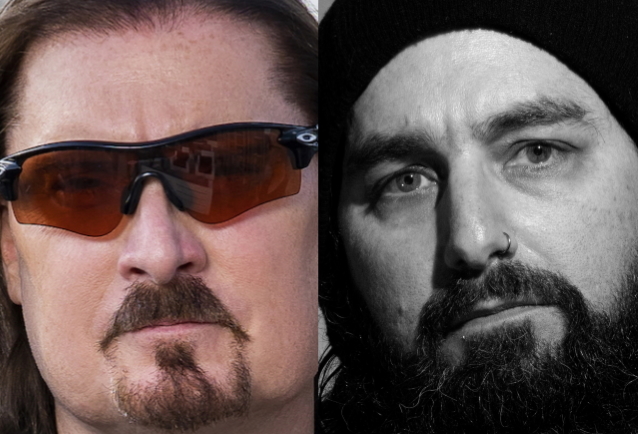 DREAM THEATER singer James LaBrie says that he hasn't spoken to the band's original drummer Mike Portnoy in more than a decade.

Portnoy, who co-founded DREAM THEATER 36 years ago, abruptly quit the band in September 2010 while on tour with AVENGED SEVENFOLD. He has since been replaced by Mike Mangini (ANNIHILATOR, EXTREME, STEVE VAI).

LaBrie discussed his relationship with Portnoy in a new interview with Radio Forrest. He said: "I haven't spoken to Mike, to be quite honest, since he left the band. So I think that pretty much says it all."

Portnoy was a guest on DREAM THEATER guitarist John Petrucci's second solo album, "Terminal Velocity", which was released in August 2020 via Sound Mind Music/The Orchard. The effort marked the first time Petrucci and Portnoy recorded together in over a decade, as well as their first time playing together since Portnoy departed DREAM THEATER. John later shot down speculation among DREAM THEATER fans that it's only a matter of time before Portnoy returns to the band, telling Spain's Metal Hammer: "I think it's really important for everybody's sake — for fans to understand this. I think it's important, out of respect for both drummers — for Mike Mangini and Mike Portnoy — that there's no misconstrued thing: 'Oh, this means something else.' This is [Portnoy] playing on my solo album, which is a really happy moment for me… I don't want people to get the wrong idea. I don't wanna create any drama or weirdness, because it's all positive. I made a solo album — finally, after 15 years — and I got my friend to play drums on it, who I haven't played with in 10 years. So that's the vibe."

Since the 2010 departure of Portnoy, Petrucci, along with keyboardist Jordan Rudess, has taken on much of the songwriting load for DREAM THEATER, including 2016's controversial double concept album, "The Astonishing", 2019's "Distance Over Time" and the band's latest LP, "A View From The Top Of The World".