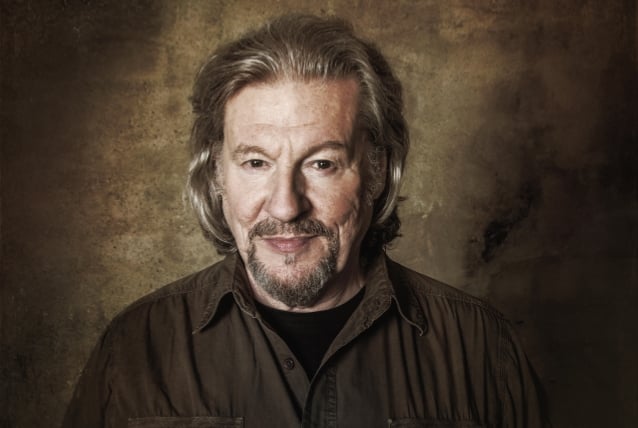 Drummer TED MCKENNA, Who Has Played With RORY GALLAGHER And MICHAEL SCHENKER, Dead At 68

Scottish drummer Edward "Ted" McKenna, who has played with THE SENSATIONAL ALEX HARVEY BAND, Rory Gallagher, MICHAEL SCHENKER GROUP and Ian Gillan, has died at the age of 68.

The news of McKenna's passing was confirmed on Facebook by a friend, who wrote: "For everyone who loved him, Ted died this morning from a haemorrhage during elective surgery. Freak occurrence and a huge surgical team fought for 10 hours to save him.

"Unfortunately, there was no solution to stop the bleeding and he faded away without ever knowing. I'm going to miss him so much."

Earlier today, Michael Schenker wrote on Facebook: "We are totally heartbroken to hear about Ted McKenna, our amazing drummer and dearest friend, passing away this morning. Its a massive shock and a huge loss to lose Ted so suddenly.

"He always had a smile on his face and was one of the most sincerely genuine people you could ever have the pleasure of meeting. One of the great rock drummers, he always played from the heart and his heart was music.

Former MSG bass player Chris Glen also reacted to the reports, writing: "Awoke this morning to the terrible news that our beloved brother Ted has left us. Seemingly he passed away during complications with his operation for his hernia. My most heartfelt condolences to all his friends and family... Just can't believe it."

Ex-MARILLION frontman and prog rock legend Fish mourned the death of his friend, saying: "I just heard the tragic news today that my dear friend Ted McKenna passed away this morning. A fabulous musician and one of the all-time greats who inspired so many rock drummers across generations he was a truly legendary stick man who graced so many kits behind so many world-famous bands. I had the enormous pleasure of not only working in the studio with him but also sharing stages in various incarnations over the years. He was a monster drummer with endless energies who played with so much soul and passion and drove songs with a power and grace like no other.

"But it wasn't only his playing that made him such a legend. He was a beautiful man who could drift from the comic to the serious, abound with stories and anecdotes, a perpetual smile despite all the difficulties he encountered and suffered over the years with never a bad word to say about anyone. I loved his bear hugs and his enthusiasm for everything. Always positive and always there for you if you needed him. He was a man's man and I am honoured to have had him as a true friend.

"My heart goes out to his family and his friends, of which he had so many and to all the people he touched with the music over his long years with us. He will be deeply missed and never replaced.

Former STATUS QUO drummer John Coghlan wrote: "Very sorry to receive the sad news of our dear friend Ted McKenna. Fab drummer and such a great guy. We shall miss you."

Bassist Neil Murray, who is best known for his work in WHITESNAKE, BLACK SABBATH and Gary Moore, said: "Completely shocked by the very sad news of the sudden death of drummer Ted McKenna (SAHB, Michael Schenker, Rory Gallagher and many others) who I spent time with only three weeks ago at the Cozy Powell Birthday Bash. A lovely guy and great drummer who will be much missed."

In a 2013 interview with Hit Channel, McKenna said that he had "many influences" as a drummer. "The early ones were Fred Astaire's feet; Sandy Nelson. Tony Meehan and Brian Bennett of THE SHADOWS, Bobby Elliot from THE HOLLIES. Later, Mitch Mitchell [Jimi Hendrix], Carmine Appice of VANILLA FUDGE, then jazz drummers Buddy Rich and Tony Williams [Miles Davis], to name only two. Too many great drummers to mention, but my band supported Robert Plant and the BAND OF JOY in 1967 and I saw and met John Bonham. We both raved about Carmine Appice but watching him play changed my attitude towards the drum kit."

Asked if he felt any pressure replacing Cozy Powell (RAINBOW, BLACK SABBATH) in MICHAEL SCHENKER GROUP, Ted said: "No. I felt very comfortable joining MSG. Michael's excessive behavior could be quite difficult to deal with in those days but he was always pretty professional when it came to playing. He was much more together when I toured Japan with him in 2008."

We are totally heartbroken to hear about Ted McKenna, our amazing drummer and dearest friend, passing away this morning....

This doesn’t seem real. It is unfathomable that I will never look...

I just heard the tragic news today that my dear friend Ted McKenna passed away this morning. A fabulous musician and one...

Awoke this morning to the terrible news that our beloved brother Ted has left us,seemingly he passed away during...

Very sorry to receive the sad news of our dear friend Ted McKenna... Fab drummer and such a great guy. We shall miss you.

Its with the heaviest of hearts that reports that Ted Mckenna had passed away are indeed true,we just cant believe...

Wow!... Sad to hear the passing of Ted McKenna :( Drummer MSG and Alex Harvey band... Glad we got to work together at Cozy Powells birthday bash just a couple of weeks ago!! … Rest mate.