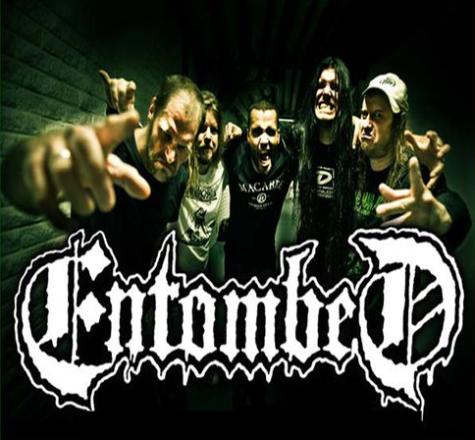 ENTOMBED: New Single Due In May

Stockholm, Sweden-based label Threeman Recordings, which is owned and run by members of ENTOMBED, recently launched a new collaboration with Ninetone Records. The first release under this arrangement will be a single for the re-recorded version of the song "Amok" from ENTOMBED's 2007 album, "Serpent Saints - The Ten Amendments", produced by Patrik Frisk (CORRODED). A May 23 release is expected.

In a May 2011 interview with the Stormbringer.at webzine, ENTOMBED guitarist Alex Hellid stated about the progress of the songwriting sessions for the long-awaited follow-up to "Serpent Saints", "We're just taking our time getting the pieces together properly this time. We just wanna make sure that it's a really good album. Now we have a complete lineup again also, and a lot of fresh, new blood as well. So it's gonna be fun to create something new now. . . We wanna get the group together and get a strong foundation to create something good; that's the goal here. . . We'll just concentrate on [creating] something great."

He added, "I [try not] to focus on too much at the same time. [My attitude] is 'Let's just make one great song to start with,' and then we'll take it from there. . . We have a pretty broad palette of things we can do, and we'll try and find a place for anything. 'Cause we enjoy everything from the fastest death/black metal stuff to whatever, so the songs that we come up with, we'll just have to find a space for them — some stuff might be [releases as] an album, some stuff might be a single…"

He continued, "I think it's kind of boring, in a way, to just think in terms of a full-length] 'album,' especially when nobody seems to really create classic albums anymore, and a lot of people don't even buy them anymore. If wanna record our favorite cover songs, there should be a place for that as well.

"It's been four years [since the last album came out] and I feel that we have so much creativity in the band and so many things that we can all put under this roof of things that we like collectively. And what I wanna do is for us to find a way to channel all our creativity and also make it the best and the greatest it can be."

Fan-filmed video footage of ENTOMBED's performance at the Mass Deathtruction festival, which was held November 19-20, 2011 at La Ferme du Bièreau of Louvain-la-Neuve in Belgium, can be seen below.