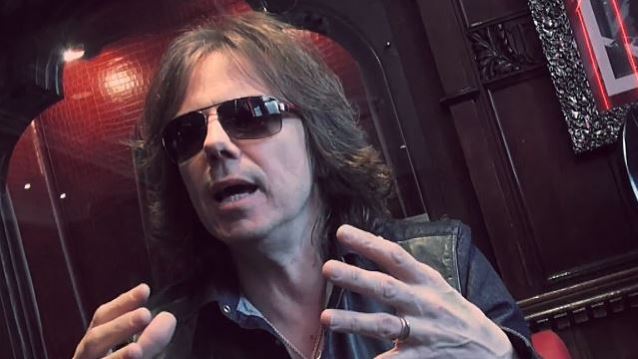 EUROPE's JOEY TEMPEST: What You Experience Between Ages Of 15 And 25 Stays With You Forever

Asked if EUROPE's tenth album, "War Of Kings", is a "tribute of sorts" to classic rock bands like LED ZEPPELIN and DEEP PURPLE, Tempest responded: "I suppose it is in a way, because when you're younger, when you're between 15 and 25, what you experience then is the deepest thing; it stays with you forever. You forget it for a while, 'cause you go on in your journey and your life, and you do other things, but slowly, it starts coming back to you. So, automatically, we are expressing ourselves in a musician kind of way, in a classic rock kind of way, because we love it, and we love the way the drums were recorded in the late '70s — drums, bass and guitar — and we think that's the best way to record those instruments. The '80s and '90s, everybody was experimenting with how to record, [and the results were] not so good, not too good."

He continued: "It's not really a special homage, though — it's automatic. But what we wanted to do was to find a vibe for the record, a signature, if you like, a sound. Like, for instance, the old great albums have, like 'Led Zeppelin IV' or 'Machine Head'."

"War Of Kings" will be released on March 10 via UDR Music. Recorded at the brand new PanGaia Studios in Stockholm, Sweden, produced by Dave Cobb (RIVAL SONS) and engineered by John Netti, the CD sees the classic rocking quintet confidently creating 11 monsterously melodic, yet hard-hitting, classic rock and roll standouts for their fervent global audience.

"War Of Kings" will be available in multiple formats, as a CD digipak, a CD jewel case, a vinyl LP and in digital download format.

EUROPE's place as a legendary classic rock band was platinum-stamped early in their career, having enjoyed an explosive period of worldwide success in the '80s, under-pinned by their hit album and single "The Final Countdown", before going on hiatus between 1992 and 2003. They reunited and quickly settled into a period of re-establishment which has seen them re-enforce their reputation worldwide as one of the premier purveyors of blues-tinged classic rock with an edge and some kick. Their last album, 2012's "Bag Of Bones", saw EUROPE hit the U.K. top 40 rock album charts and debut at No. 2 on the Swedish national charts, and "War Of Kings" is set to take full advantage of the global groundwork EUROPE have put in over the last few years.