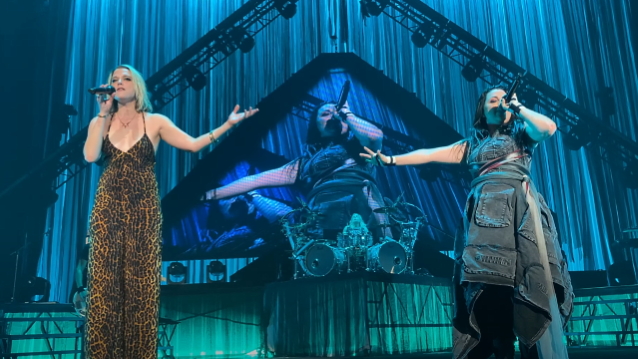 EVANESCENCE has postponed the remaining five shows on its U.S. tour with HALESTORM due to multiple COVID-19 cases within the touring party. The concerts in Cincinnati, Pittsburgh, Camden, Newark, and Worcester, which were originally scheduled to take place this week, will now happen at the end of January.

EVANESCENCE singer Amy Lee said: "We've done everything we could to try and make it work, but with multiple positive COVID tests in our touring party, it just wouldn't be right to continue the show schedule as is.

"All the bands and crew have been so diligent with every precaution to keep this from happening but this virus is a real bitch! We are all vaccinated and nobody's symptoms are severe, we are very grateful for that.

"This tour has been an unforgettable experience that we are so proud of. From the production, to our fantastic crew, to HALESTORM and LILITH CZAR and PLUSH — and most of all, to you. Thank you from the bottom of our hearts to you incredible fans for making this dream a reality, and making it mean so much more that we ever imagined it could. Thank you for your understanding. We love you!"

EVANESCENCE and HALESTORM's tour kicked off on November 5 at in Portland, Oregon and was scheduled to run through December 18 in Worcester, Massachusetts.

EVANESCENCE and HALESTORM first toured together in 2012. Lee later guested on the track "Break In" on HALESTORM's 2020 "Reimagined" EP and HALESTORM frontwoman Lzzy Hale lent backing vocals to the EVANESCENCE song "Use My Voice" and appeared in the accompanying music video.

EVANESCENCE was on tour supporting this year's "The Bitter Truth" album. HALESTORM was promoting its latest single, "Back From The Dead", which recently became the band's sixth No. 1 at rock radio.