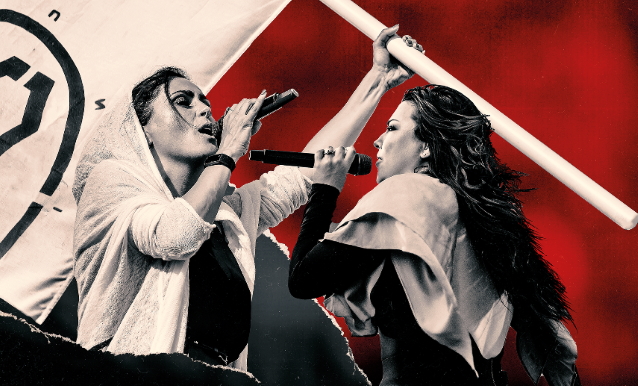 EVANESCENCE And WITHIN TEMPTATION Push Back European Tour To 2022

Due to the ongoing restrictions related to the COVID-19 pandemic and the uncertainty that local authorities will be able to provide a safe environment in which their European fans can thoroughly enjoy shows by September of this year, EVANESCENCE and WITHIN TEMPTATION have unfortunately had to make the decision to push back their highly anticipated co-headline "Worlds Collide" tour to spring 2022.

EVANESCENCE kept busy during the lockdown and released four new singles as well as finishing the recording of their new album — the just-released "The Bitter Truth", which reached No. 1 on iTunes in 22 countries, No. 2 in Germany and No. 4 in the U.K. charts. They are also launching a special graphic anthology series "Echoes From The Void", in collaboration with Heavy Metal Entertainment, which is inspired by "The Bitter Truth" cuts.

In a message to fans, the band said: "Well, guys, we have to push this back one more time. We hate to make you wait longer, but we are absolutely determined to make this tour we've all been looking forward to happening, so check out the new dates. We will be counting the days till we finally get to celebrate all this new music together. In the meantime, stay safe, stay sane, and keep your headbanging to 'The Bitter Truth'! You will have no excuse not to know every word by next spring! We love you!"

Despite not being able to tour, WITHIN TEMPTATION is still moving full speed ahead, having released two singles during the lockdown. "Entertain You" and "The Purge" have exceeded all expectations, both peaking in the Top 20 of the Billboard Mainstream Rock Indicator chart and receiving worldwide airplay. Fans can expect the band to release brand new music soon, and in the meantime can enjoy their vast re-released catalogue on all digital streaming platforms.

WITHIN TEMPTATION says: "This is definitely not what we've wished for, but reality tells us otherwise: we have to postpone the 'Worlds Collide' tour. Although we can't make the current situation better than it is, we hope to put a BIG smile on your faces again soon, because... We haven't been sitting still and we have a LOT of cool stuff coming up for you! Until then, stay safe. And you know what? Third time's a charm, so see you in March or April 2022!"

The two bands will return to the road on March 16, 2022 in Leipzig, Germany. The tour will include dates in Leeds, London, Glasgow and Birmingham in the U.K. and wrap in Zurich, Switzerland on April 15. All existing tickets and VIP packages will remain valid for the rescheduled dates.

** Due to overwhelming demand the Munich show has been upgraded to Olympiahalle. Tickets purchased for the Zenith are still valid.
^ SMASH INTO PIECES support
~ VERIDIA support 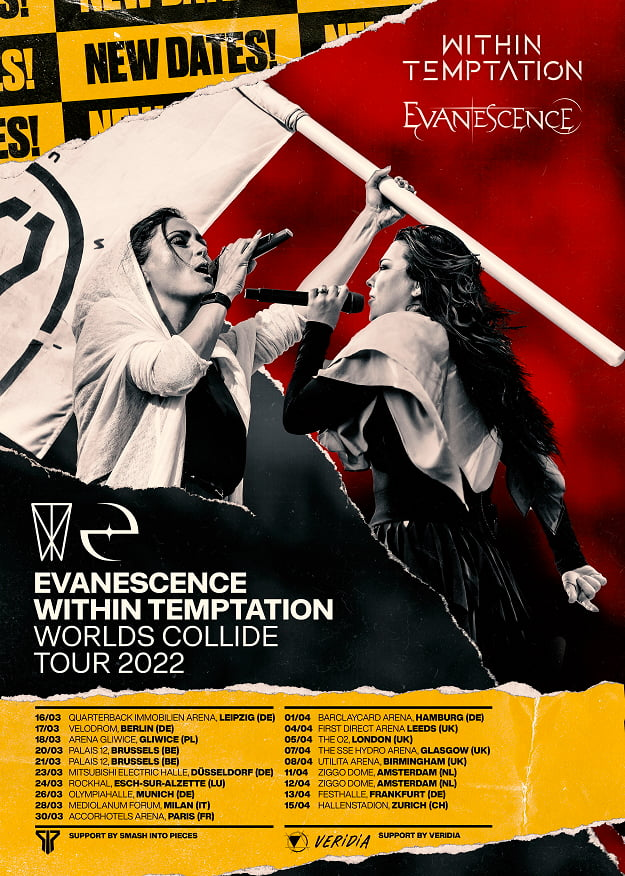