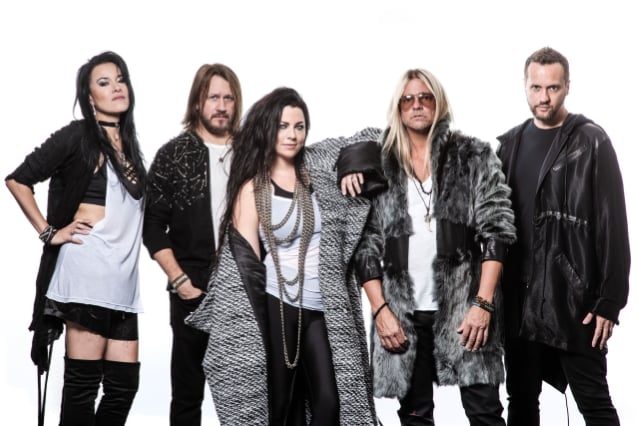 EVANESCENCE To Release One New Song Before April 2020 Tour

EVANESCENCE singer Amy Lee has spoken to "Loudwire Nights" about the progress of the songwriting sessions for the long-awaited follow-up to the band's 2011 self-titled effort.

"This has been something where we are all in there together for most of the time so far," she said (hear audio below).

"We're in there with [producer] Nick Raskulinecz right now, who we've worked with before and loved working with before. He produced our self-titled album, which is really our favorite album. He also mixed [EVANESCENCE's recent cover of the FLEETWOOD MAC song] 'The Chain'.

"We've been in there kind of working as a team," she reiterated. "The songs came from all different places. They're not all in the same vein.

"We're working on four songs right now. Originally, we were gonna go in there and just do two. I just wanna kind of do a few songs at a time, keep writing, go in and do a few more, release 'em one by one. But once we opened the can of worms, it kept growing. 'Oh, we can't do this one and not do this one. We have to do four.' So, it's four. So we're working double hard to get it all done with the time that we have. But it's going really great."

Speaking about the musical direction of the new EVANESCENCE material, Amy said: "It's a combination of a lot of things. It's definitely one hundred percent us, but it's also taking risks. And I think it's meaningful — it's deeply meaningful. But at the same time, a lot of it has attitude. I don't know if I can explain that super well, but some of our music is like that. If you can listen back and think about, especially some of the later music, like 'What You Want' or 'Call Me When You're Sober', there's a track or two in there that is the next step from that in its feeling, I would say."

On the topic of the lyrical themes that are covered in the new EVANESCENCE songs, Amy said: "I've got a new perspective in my life right now — not just because everything is so awesome and I'm older and I have a kid, but also suffered some serious loss in the past few years; I lost my brother. I definitely have felt like I have one foot on the other side a lot the past two years. So there's a lot of writing that's, I guess, in a way, back to my roots in that I'm searching for meaning in things. But it's not all dark and serious. If you're gonna sum up your whole self, it's gonna take a lot of words and a lot of songs. I don't know if I can do it in one album, but [laughs] I can do my best."

As for a possible release date for the new EVANESCENCE music, Lee said: "Well, it's gonna be a song at a time, like I said, so it's not like we're gonna drop a 12-song record all of a sudden at any point. I do wanna have our first new song out by the time we go on our April tour, because I wanna be playing it then. That's the best I can give you.

"I wanna do one at a time for a couple of reasons," she continued. "One, it's just fun for us to do it that way. But I kind of wanna give each one its own moment. And that's the way I digest music anyway — usually a piece at a time. And I don't think that's that weird; I think a lot of people are that way. So I think it would be really fun for us all to be able to kind of go on a journey together simultaneously as people that follow this band or like this band… We'll probably do that for, like, five or six songs and then drop the rest of it together in the end."

Last month, EVANESCENCE returned with its first new rock recording in eight years, "The Chain (From Gears 5)". The band recorded its signature-rock version of the FLEETWOOD MAC classic following Lee having lent her vocals to the launch trailer for the Xbox Game Studios' "Gears 5" for Xbox One, Windows 10, and Steam, from the massively popular "Gears Of War" series.

EVANESCENCE will play at the Download festival in Tokyo in March. After a short break, the group head out on a massive co-headline tour of Europe with WITHIN TEMPTATION. The new batch of dates kicks off on April 4 in Brussels, Belgium and concludes in Birmingham, U.K. on May 1. EVANESCENCE then returns to the U.S. for a headline show at The Fillmore in Minneapolis, Minnesota on May 14.