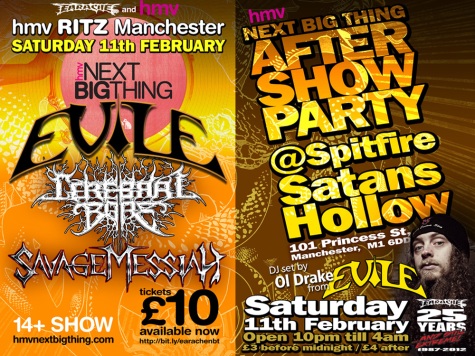 British thrashers EVILE will play their heart-wrenching song "In Memoriam" live for the first time ever this weekend in memory of WOODS OF YPRES frontman David Gold, who tragically passed away on December 21.

EVILE will perform at the HMV Ritz in Manchester, U.K. this Saturday, February 11 with CEREBRAL BORE and SAVAGE MESSIAH as part of HMV's Next Big Thing, where WOODS OF YPRES were also originally scheduled to appear. The members of EVILE have revealed that they will play "In Memoriam" — which is taken from the band's new album, "Five Serpent's Teeth" — as a tribute to their fallen labelmate.

Commmented EVILE lead guitarist Ol Drake: "We were all deeply saddened to hear the news of WOODS OF YPRES' mastermind David Gold passing away. Their obvious cancellation of the Manchester show left a big hole in the lineup I was so looking forward to seeing and being a part of. We've been thinking of airing 'In Memoriam' live for a while, so we'd like to not only play the song for our own reasons, but to also play it at the upcoming Manchester show in memory of David."

For more information, see the flyer below.

Gold was killed on December 21 in a car accident near Barrie, Ontario, Canada.