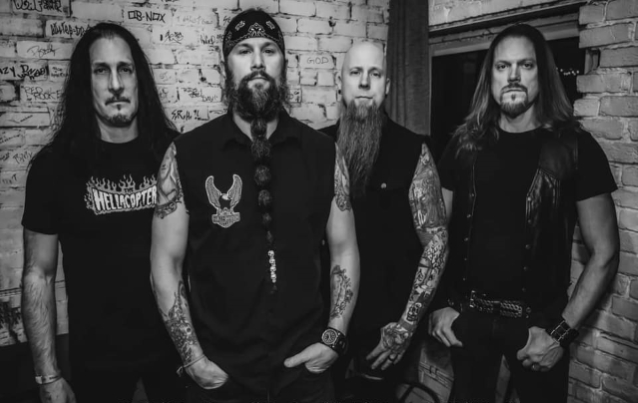 "We did a record during 2020. And it's done," he said (as transcribed by BLABBERMOUTH.NET). "There's a couple of little tweaks left, so we're working on the release plan for that. [Producer] Chris Collier actually did that record. He got a little bit busy doing the [new] KORN record, so we got put back for a couple of weeks, but he's finishing it up right now. So the record is amazing; it sounds actually fantastic. I'm super excited about it."

Regarding how he came to play bass for KILL DEVIL HILL, Matt said: "[KILL DEVIL HILL guitarist] Mark [Zavon] had reached out to me to play bass for him. And I've known [KILL DEVIL HILL singer] Dewey [Bragg] for 20-something years. We used to jam together in public storage back in the day, which is the same place… IN THIS MOMENT practiced there. We practiced there. DEADSETT, which became IN THIS MOMENT, and then FIVE FINGER DEATH PUNCH, we were all this little village we had going on. So it was a no-brainer for me to join that band. It's fun, and playing with Johnny Kelly is a blessing. He's just a fantastic drummer. It's that slower kind of sludgier rock for me, so [there are] huge, fat bass grooves that I get lay down instead of having to play fifty thousand notes a second. It's a really fun vibe for me."

Snell added: "I remember I was listening to an old DOWN record [while I] was driving to work, and I'm, like, 'Man, I'd really like to be in a band like this.' I guess that was something I put off to God, 'cause he gave it to me."

Shortly after he left KILL DEVIL HILL in early 2014, Vinny said that the band's inability to gain significant traction with its music was a major factor in his decision. However, more recently, Vinny has suggested that he exited the group because he "couldn't deal with" the fact that some of his bandmates were consistently tardy for KILL DEVIL HILL activities by an hour and a half or even longer.

Vinny, who had previously played with BLACK SABBATH, DIO and HEAVEN & HELL, left KILL DEVIL HILL in March 2014. He has since been replaced by the aforementioned Johnny Kelly (DANZIG, TYPE O NEGATIVE).

Back in 2019, Zavon confirmed that KILL DEVIL HILL had recruited Nico D'Arnese to play bass following the departure of Brown.