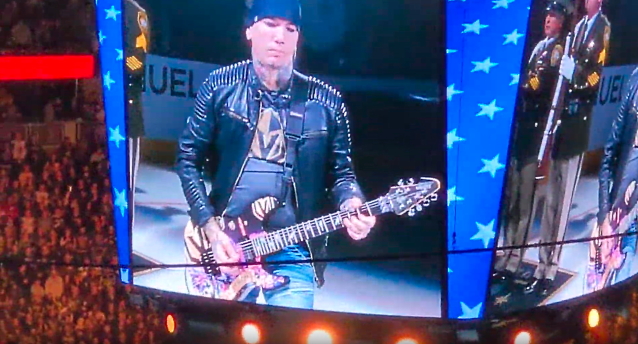 Last week, Ashba said that he "just signed a huge deal" for his new solo project, which will see him "featuring different singers from different genres on every song."

Although Ashba initially started work on the project as a collaboration with with his SIXX:A.M. bandmate James Michael — under the band name PYROMANTIC — it has since evolved into an Ashba solo thing, with Michael announcing in 2018 that he was stepping away from the group.

Regarding his upcoming solo disc, which will be released under the ASHBA banner, DJ told Fox5's "More": "I spent three years in the studio creating this new sound and I took Latin, pop, rock and EDM and I just threw it in a blender as a producer. I've done the rock thing, I've done that my whole life, but I wanted to create a new sound — something fresh, something anybody could latch on to. If you like Latin, there's enough of that; if you like rock, there's enough of it in there. So it's a really cool, unique sound. I'm pretty proud of it."

According to DJ, he will promote the LP by embarking on a tour on which he will be joined only by a VJ.

Last September, SIXX:A.M. released a new song called "Talk To Me". The band, which also features bassist Nikki Sixx and drummer Dustin Steinke, had been on hiatus since 2017.