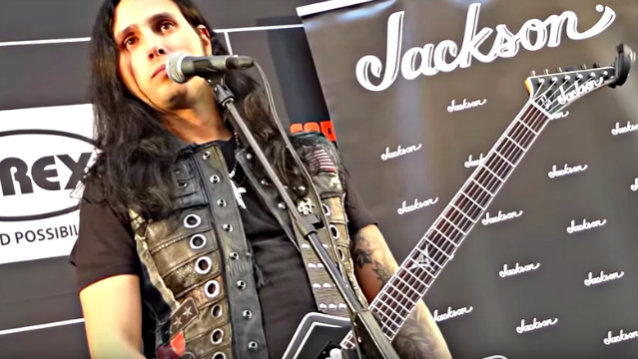 Video footage of Greek guitar virtuoso Gus G.'s September 30 guitar clinic at the Copenhagen Guitar Show in Copenhagen, Denmark can be seen below.

Gus G., who joined Ozzy Osbourne's band just under a decade ago, recently said that it was "great to see" the BLACK SABBATH singer back together with his longtime axeman Zakk Wylde.

It was announced in April that Wylde would be rejoining Ozzy's backing group for all his 2017 solo show dates. Osbourne's touring lineup also includes Rob "Blasko" Nicholson on bass, Tommy Clufetos on drums and Adam Wakeman on keyboards.

Gus, who played on Ozzy's latest studio album, 2010's "Scream", said that it was "an honor and a privilege" to share the stage with Osbourne, calling it "an experience of a lifetime."

Gus earlier in the year released a new studio album with his long-running band FIREWIND, "Immortals", after issuing two discs as a solo artist.