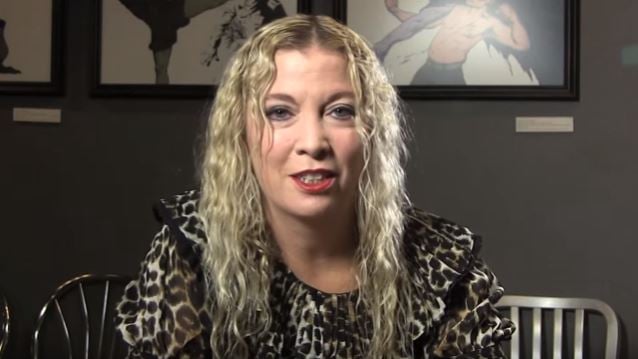 Sean Yseult, best known as the bass player from the multi-platinum and twice Grammy-nominated band WHITE ZOMBIE, was interviewed by rock journalist Mitch Lafon for a recent edition of the "One On One With Mitch Lafon" podcast (Facebook page). You can now listen to the chat using the Spreaker widget below.

Asked what her reaction was when she first found out former WHITE ZOMBIE frontman Rob Zombie was pursuing a solo career after the band's 1997 split, Sean said: "First of all, I knew that we were breaking up — it wasn't a big surprise — but it was a little bit of a slap in the face to me and Jay [Yuenger, former WHITE ZOMBIE guitarist] when we had our… After one year, we were supposed to be taking a break, and then we were gonna have a call and talk about getting back together and making a record. I knew that we weren't getting back together, but literally the next… Jay and I both said, 'We have more riffs. We'd love to write some more music.' And Rob kept saying, 'No, no, no. I think we're done.' And what are you gonna say? You can't tell the singer that he has to sing. [Laughs] Even though our manager told Jay and I that we should go on and continue on with WHITE ZOMBIE and get a new singer, we both refused that. But the slap in the face was that [Rob's] solo record came out, like, the next day, so he spent that year making a record, knowing that [WHITE ZOMBIE wasn't] gonna be a band again. So that was a little… you know… whatever. But, like, who cares? You know, really. I didn't care. I moved to New Orleans. I knew that we'd already broke up anyway."

On June 3, Numero resurrected WHITE ZOMBIE's eternally out-of-print early EPs and LPs as "It Came From N.Y.C.". Spread across five LPs or three compact discs, all 39 tracks have been remastered by Yuenger and packaged alongside the original lurid artwork. The accompanying 108-page book painstakingly documents WHITE ZOMBIE's punishing progression through scores of unpublished photos, period discography, a T-shirtography, and tales from the terrifying early years that stitch together the sordid story of a band whose true power eclipsed its mainstream heyday.

He added, "Everybody likes to make up stories which aren't true. I don't think that's fair. Ivan left the band, John Tempesta came in and the band sounded better than ever, we kept playing and made bigger records and did more tours, so I don't see how that had anything to do with it."