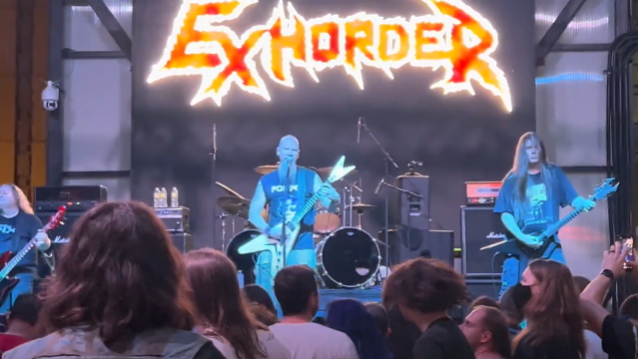 Thrash metal pioneers EXHORDER recruited former CANNIBAL CORPSE guitarist Pat O'Brien for their performance Sunday night (May 29) at the Maryland Deathfest in Baltimore, Maryland. The gig took place three months after guitarist Marzi Montazeri left EXHORDER, explaining at the time in a statement that he "decided to no longer be a part of it."

O'Brien made headlines more than three years ago when he was arrested for burglary and assaulting a police officer while his Florida home was in flames. At the time of the arrest, deputies said he burglarized a house and charged at a deputy with a knife.

O'Brien, who had been a member of CANNIBAL CORPSE for more than two decades, was released from Hillsborough County jail on December 14, 2018 after posting a $50,000 surety bond. Several days earlier, at a hearing, a judge told the now-57-year-old musician, clad in an anti-suicide vest with his hands and ankles chained together, that he would first have to pass a drug test before he would be allowed to post bail and leave jail.

In March 2021, O'Brien was sentenced to time served and five years of probation and ordered to pay $23,793.45 in restitution. He was also ordered to get drug and alcohol evaluations and render 150 hours of community service. In addition, O'Brien was ordered to abstain from using alcohol and controlled substances and to be subject to random testing.

In early 2021, it was announced that O'Brien had been replaced in CANNIBAL CORPSE by Erik Rutan, one of the death metal's most acclaimed guitarists who is known for his time as part of MORBID ANGEL throughout the '90s and early 2000s, as well as handling vocals/guitars for HATE ETERNAL.

Shortly after the Houston-based Montazeri announced his departure from EXHORDER, the remaining members of the band — EXHORDER vocalist Kyle Thomas, bassist Jason VieBrooks and drummer Sasha Horn — said that they and Marzi had been "moving in different directions" and assured fans that they would "continue to thrive"

In the 1990s, Marzi hooked up with SUPERJOINT RITUAL, with PANTERA singer Philip Anselmo as lead vocalist, and appeared on the band's first two demos. By March of 2010, Marzi rejoined forces with Anselmo to work on what became Philip's first solo project since PANTERA, PHILIP H. ANSELMO & THE ILLEGALS. Marzi recorded THE ILLEGALS' debut album, "Walk Through Exits Only", and toured with the band before exiting the group in November 2015. Two years later, Marzi joined EXHORDER, which released its first album in 27 years, "Mourn The Southern Skies", in September 2019 via Nuclear Blast Records.

Thomas is now the sole remaining founding member of EXHORDER, which released its debut album, "Slaughter In The Vatican", way back in 1990. In February 2020, EXHORDER parted ways with its original guitarist Vinnie LaBella, who wrote much of the material on "Mourn The Southern Skies". The remaining members of the group later issued a statement saying that they would fulfill their "touring and recording obligations for 2020 and beyond."

Last December, Thomas confirmed to the "Brutally Delicious" podcast that he and his bandmates had spent much of the coronavirus downtime working on material for the follow-up to "Mourn The Southern Skies".

In February 2021, Thomas told "The Dan Chan Show" that it wasn't strange for him to be the only remaining founding member of EXHORDER. "At this point, I've jammed with so many people over the years — so many different lineups for this and that, fill-ins and all this stuff. To me, it doesn't really matter as much who's there, as long as the material that's being played is being played within the spirit of that band in particular," he said. "And the stuff that we're writing now, it's amazing. I play it for a lot of people that are my confidants, people love the band, and they're gonna shoot me straight. And the new stuff that we're working on, everybody's, like, 'Wow. It sounds like EXHORDER to me.'"

EXHORDER, which is cited by many as the originator of the riff-heavy power-groove approach popularized by PANTERA, completed a U.S. headlining tour in late 2021 during which it performed "Slaughter In The Vatican" in its entirety.