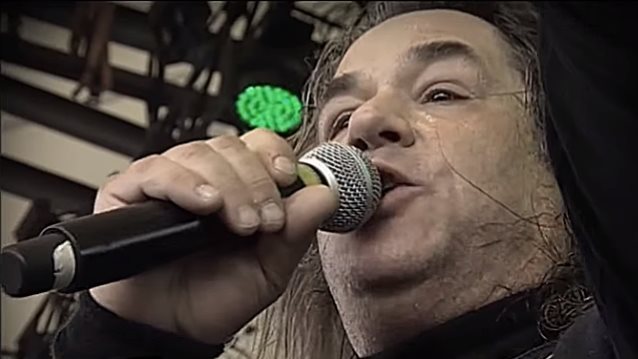 EXODUS's Next Album Will Be 'Heavy As S**t,' Says STEVE 'ZETRO' SOUZA

Steve "Zetro" Souza says that EXODUS's upcoming follow-up to 2014's "Blood In Blood Out" album won't be merely a continuation of its predecessor.

The San Francisco Bay Area thrash metal veterans are planning to enter the studio in the fall to begin recording the new disc for an early 2018 release.

Speaking to Canada's The Metal Voice, the EXODUS frontman stated about the timetable for the band's next effort (hear audio below): "Gary [Holt, EXODUS guitarist] and Tom [Hunting, EXODUS drummer] and I had to go to Metal Hammer [Golden Gods] awards last Monday in London, and I actually looked in [Gary's] eyes and said, 'When, Holt? When?' And he said we'll be in the studio around November. So [it will] probably [be out in] early spring."

Regarding the progress of the songwriting sessions for EXODUS's new album, Souza said: "Gary writes when he's out [touring] with SLAYER. He has this little recording unit in his room, so he'll write full stuff with everything on it and send it out [to the rest of us].

Asked if the new EXODUS material he has heard so far sounds like a continuation of "Blood In Blood Out", Souza said: "I don't think so. What I heard, it's not. It's a lot of records put together, I think. What I've heard, it's got a lot of different stuff on it — stuff that was on records that I wasn't on, [albums that were recorded] with [former EXODUS singer] Rob [Dukes] — a little bit of that into it. Some [elements of] 'Tempo [Of The Damned]' in it. Some 'Blood In Blood Out'. Again, I've heard two songs that I actually have in my phone, musically, and that's what I think the vein of it is. [It's] heavy as shit, though — really fucking heavy."

EXODUS drummer Tom Hunting told the "Mike James Rock Show" at this year's Download that the band has "five or six" new songs structured so far for the follow-up to "Blood In Blood Out", as well as "bits and pieces" of the remaining few tracks that will appear on the forthcoming disc.