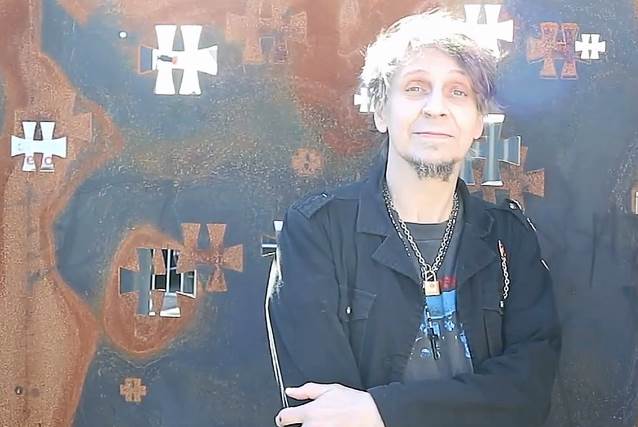 EYEHATEGOD frontman Mike IX Williams says that the band is in the process of putting new music together for the follow-up to the 2014 self-titled album. "We were listening to the demo today on our drive here," he told Hayley Leggs before the band's appearance at this year's Hellfest in Clisson, France (see video below). "We have a demo of, I think, maybe five or six songs. But I think we're gonna re-record it. 'Cause now we're a four-piece band. And with my health thing over with, it's kind of like a new era of the band."

He explained: "We're not one of those bands that tours, puts out an album, tours… We do it when we want to and when we feel… I mean, bands like that, sometimes they put out shitty albums 'cause they just write stuff very quickly. We just wanna take our time and write good songs."

As for the sound of the new EYEHATEGOD material, Mike said: "It's the same EYEHATEGOD. We're like AC/DC. It's EYEHATEGOD; it's gonna sound like EYEHATEGOD. Different riffs, different lyrics, but the sound is ours."

Williams also addressed the absence of longtime guitarist Brian Patton, who is no longer touring with EYEHATEGOD after a 25-year stint with the band. "He quit, because he has a new baby," the singer said. "He has two kids now — he has a new baby — and he's taking care of his wife's parents; they're having some health issues, I believe. So it's for a good cause, but he couldn't tour with us anymore. But it's fun being a four-piece; I like the sound and the vibe and everything. So it's kind of like a new era of the band."

Mike went on to say that Brian's departure hasn't had a significant impact on EYEHATEGOD's live sound. "Jimmy [Bower, guitar] puts amps on both sides, so we still have that sound but just one guitar," he said.

Williams returned to the stage in April 2017 following a successful liver transplant five months earlier. He underwent the successful surgery after fans pledged more than $50,000 thanks to a crowdfunding drive.

EYEHATEGOD's self-titled LP dropped in 2014 via Housecore Records, breaking the band's decade-and-a-half gap since their prior full-length and marking the most successful release of the band's storied history.