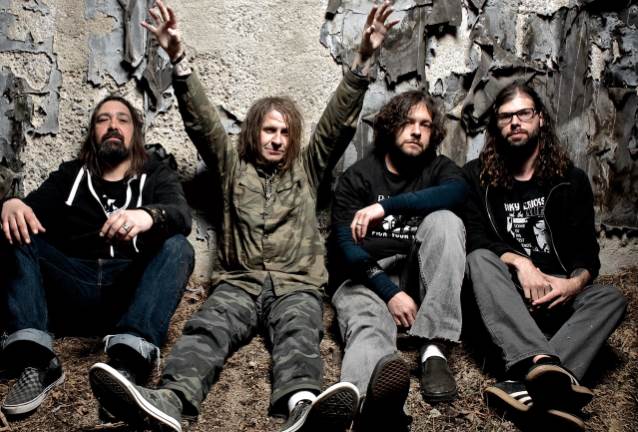 EYEHATEGOD Frontman: 'Some People Might Call Us Lazy Or Unproductive'

EYEHATEGOD frontman Mike IX Williams spoke to Metal Underground about the decade-and-a-half gap between the band's self-titled 2014 album and its predecessor, 2000's "Confederacy Of Ruined Lives".

"I think [the self-titled album was] one of our best," he said (see video below). "It's crazy — after being together that long and taking 14, 15 years to put out a new record, and then that's what we came up with.

"Some bands, they tour, then they put a record out. [And then] they [go back on] tour," he continued. "You're not gonna get quality stuff when [you do that]. It's just better to wait till you're happy with songs. I mean, some people might call us lazy or call us unproductive. The whole time we were touring, we were putting out seven-inches and splits and things, so we were active; we just didn't have a full-length. So we got that done.

Williams also confirmed that EYEHATEGOD is in the process of working on material for a new full-length album, tentatively due in 2019. "We've demoed some new songs," he said. "We're gonna record a new record, probably in September. We need to write some more songs. Like I said, we've demoed, like, seven or eight songs, but no vocals on 'em — just the music. And we're gonna see what we like and what we throw away, and re-write some stuff and write new songs."

EYEHATEGOD has just returned to North American stages for the second leg of its tour supporting BLACK LABEL SOCIETY and CORROSION OF CONFORMITY. The journey will wind its way through more than two dozen cities and includes a handful of headlining shows as well as an appearance at this year's edition of Heavy Montreal and Psycho Las Vegas.

As it did on the European tour, EYEHATEGOD is playing as a four-piece. Longtime guitarist Brian Patton, who's been missing in action on the last few EYEHATEGOD tours, last week issued a statement regarding his exit from the band, calling it "one of the hardest decisions I've ever had to make." He explained that touring and being away from his family started to get harder after his daughter was born. "Then soon after the arrival of my son, I left for a six-week tour," he said. "While I was away, both kids had some serious health scares. Being away from my family while that happened, along with an increasingly busy tour schedule, I decided the best thing for me was to step down. To concrete this decision, after a visit with my wife's parents earlier this year, it became clear that my in-laws' health was rapidly fading and they needed our help. So my family and I have moved to Greensboro, North Carolina to care for them full time."