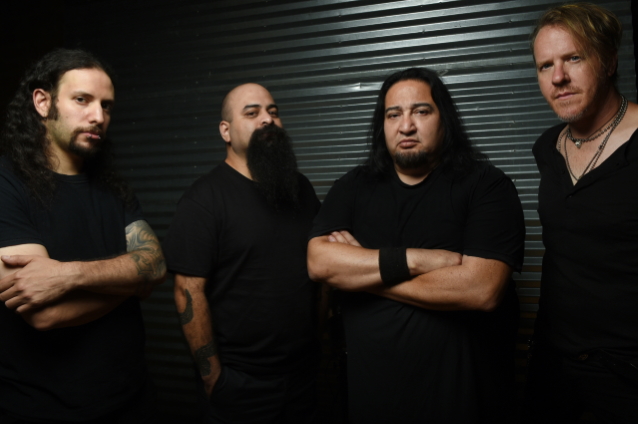 FEAR FACTORY drummer Mike Heller has confirmed to New Breed TV that the band's 2012 album "The Industrialist", will be released on digital services in a new version where the drum-machine technology used on the original recording will be replaced by live drums.

"'The Industralist', which never had real drums, is going to be — at least as far as drums go — re-recorded," Heller said (see video below). "I will be recording real drums on [it], and it will get a release alongside the original."

Hoglanlater criticizedFEAR FACTORY for deciding to use a drum machine on "The Industrialist", saying: I don't care what kind of drum machine you use, I will kill your drum machine. If you have a drummer like myself at your disposal, yet you are gonna go with a drum machine, I don't understand the thought process behind that." He added: "I gave FEAR FACTORY the deadliest record they can ever imagine, at the time, and their efforts afterwards weren't taken as seriously. So the proof is right there."

In a 2012 interview with ReGen MagazineFEAR FACTORY guitarist Dino Cazares defended the band's decision to embrace drum-machine technology on "The Industrialist". He said, "The songwriting process was much quicker, much more efficient, much more cost effective." He continued: "Obviously, a band like FEAR FACTORY has always embraced the technology from the beginning — we've always been open about it, we've always talked about it. We've always talked about guys like [producer] Rhys Fulber helping us out, ever since 'Fear Is The Mindkiller', which was after 'Soul Of A New Machine'. We've embraced all that." Cazares added: "Most people are saying, 'Them using drum programming is no different. It doesn't really sound any different.' You know what I mean?! They can expect it from a band like FEAR FACTORY. Again, it's very cost effective."

Late last month, singer Burton C. Bellissued a statement officially announcing his departure from FEAR FACTORY, saying that he "cannot align" himself with someone whom he does not trust or respect.