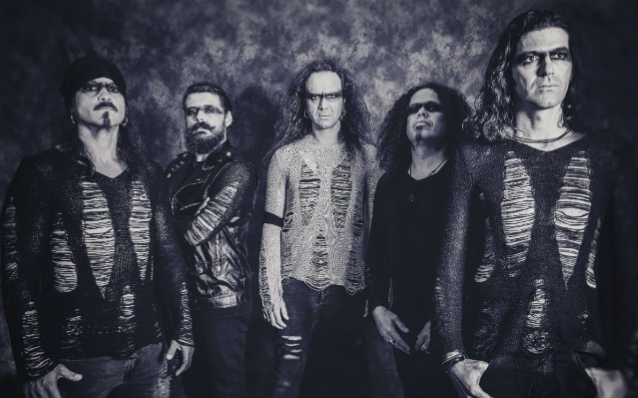 In a recent interview with Dead Rhetoric's Kyle McGinn, frontman Fernando Ribeiro of Portuguese metallers MOONSPELL discussed the transitional phase of the band's career that started with their 1998 album, "Sin/Pecado". Released after 1996's highly successful "Irreligious", "Sin/Pecado" saw MOONSPELL start to abandon some of their core gothic metal elements for a more experimental sound that divided fans and critics.

"I think that was the last year in heavy metal music where people [didn't] have the patience for bands experimenting," he said. "Twenty years later, I'm happy to see more experimental bands like ZEAL & ARDOR, ULVER and LEPROUS are getting really big and famous. I wouldn't say that 'Sin/Pecado' was ahead of its time or underrated — that would be an overstatement in my opinion, but I think that not only us, but PARADISE LOST, MY DYING BRIDE and TIAMAT — we were in a musical path that really involved experimentation and messing with the fans heads with the boundaries of dark metal. Some people really dug it, and took it to heart, but there was also a countermovement leading to these bands. It's just a name — I have no opinion about it. But for instance, bands like HAMMERFALL, were the forerunners of a certain type of 'classic,' let's call it, metal. So, there was a division in the waters.

"If you ask me as a musician, I have no regrets about 'Sin'. I would like to re-record it because I wasn't happy with the production, and I think some of those ideas were lost in translation. In a way, that's why we got a different producer for 'The Butterfly Effect'. But if people know about metal history, they should know that the main MOONSPELL influences of BATHORY and CELTIC FROST, they were experimental bands as well. We kind of didn't invent anything new, we just followed the lead and extended our wavelength to what we thought our idols would have done. Quorthon [BATHORY] actually wrote 'Under The Sign Of The Black Mark' as well as 'Twilight Of The Gods'. CELTIC FROST wrote 'Into The Pandemonium' as well as 'Morbid Tales'. So, I think that we followed that path. But you can never control what people think. That's the beauty and the curse of being a musician. We just moved on, and we are still here.

"People needed time to appreciate 'Sin', so I don't mind. We were coming from a very glorious time with 'Wolfheart' and 'Irreligious', and we got kicked in the head a little bit. But if I didn't want to be kicked in the head, I wouldn't be a musician. [Laughs] I don't want to…but I can definitely deal with it. Then some things grow on you — when I listened to 'Hammerheart' from BATHORY, I said, 'What the fuck is this?' but after a few days I loved it. When someone you love makes something you don't like, it's not a reason to get them out of your life…and music imitates life."

MOONSPELL's "Lisboa Under The Spell" live DVD/CD was released in August 2018 via Napalm Records. The live DVD/Blu-ray/3CD package captures the band's performance before 4,000 fans at the sold-out Campo Pequeno arena in their hometown of Lisbon, Portugal on February 4, 2017.