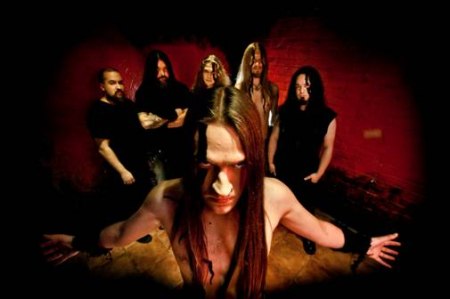 Finnish folk metallers FINNTROLL will embark on a European headlining tour in November/December. Support on the trek will come from Switzerland's SAMAEL, Greece's ROTTING CHRIST, Estonia's METSATÖLL and Maldives' NOTHNEGAL.

"Nifelvind", the new album from FINNTROLL, was released in North America on March 9 via Century Media Records. The CD was recorded at Sonic Pump Studios in Helsinki, Finland and was mastered by Mika Jussila at Finnvox Studios. The album cover artwork was created once again by the band's guitarist Skrymer.

Commented FINNTROLL in a statement: "'Nifelvind' is the most advanced and mature FINNTROLL album to date, with musical themes ranging from powerful death metal riffs to dark soundtracks, from pounding black metal to groovy '80s pop music. All this is accompanied by our trademark sound, lots of never-before-heard instruments in the metal scene, folklore and legends that make it overall the most versatile album we have created so far."