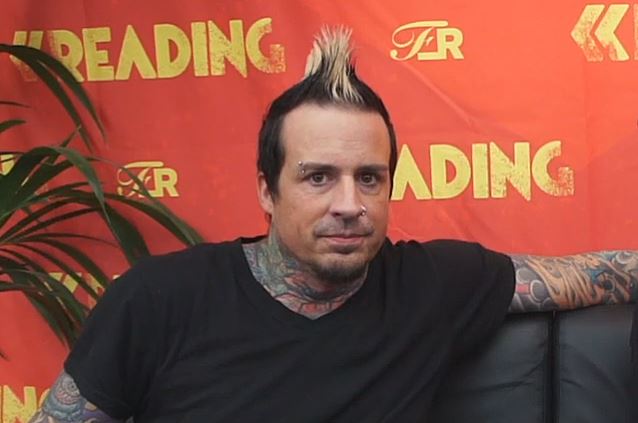 MikeJamesRockShow.com conducted an interview with FIVE FINGER DEATH PUNCH drummer Jeremy Spencer at this past weekend's Reading festival in Reading, England. You can now watch the chat below.

Asked about the progress of the songwriting and recording sessions for FIVE FINGER DEATH PUNCH's follow-up to last year's "Got Your Six" album, Jeremy said: "We've got a few tracks so far that we're really digging on.

"You know, it kind of changes course throughout the whole recording process; it starts one way and it finishes another way."

He continued: "I would prefer if we had more time to be off road and actually record, but we have to kind of fit it in when we can, and it's going well, and we're happy."

According to Jeremy, FIVE FINGER DEATH PUNCH will continue working on the new album over the course of the next few months while staying on the road in support of "Got Your Six".

"We'll be back in the studio finishing up [the next] record, but we'll be touring this one up through the end of this year," he said.

"Got Your Six" was officially certified gold on August 8 by the RIAA (Recording Industry Association of America) for sales in excess of 500,000 copies.

Effective February 1, the RIAA started including on-demand audio and video streams and a track sale equivalent in determining which releases get the coveted album awards, a change that follows a similar tweak in 2013 to include on-demand streams for its digital single award.