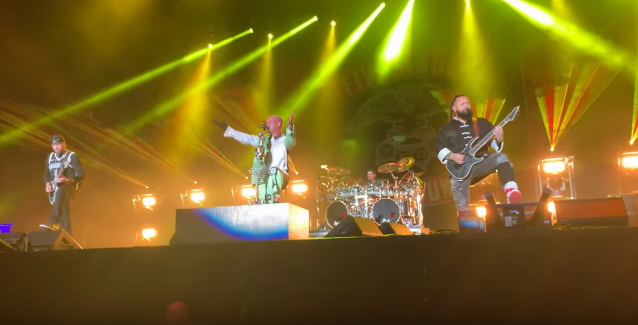 FIVE FINGER DEATH PUNCH performed for the first time in a year and a half last night (Friday, August 20) at the Iowa State Fair in Des Moines, Iowa. Fan-filmed video footage of the concert can be seen below.

After the show, FIVE FINGER DEATH PUNCH bassist Chris Kael took to his Instagram to share a few onstage and backstage photos from the event and he wrote in an accompanying message: "Iowa! Thank you. Such an incredible crowd to have performed in front of for the first time in a year and a half! For once, I don't have the words other than simply repeating, 'Thank you.' So, thank you! #ShitYesSon #BassPackagePicturesComingTomorrow #DesMoines #ForJoey".

FIVE FINGER DEATH PUNCH recently entered the Hideout Recording Studio in Las Vegas, Nevada to begin recording its new album for a 2022 release. In addition, the band has commenced re-recording its debut LP, 2007's "The Way Of The Fist", for its 15th anniversary.

FIVE FINGER DEATH PUNCH's upcoming album will be the band's first with its latest addition, renowned British virtuoso Andy James, who replaced Jason Hook last year. James was previously featured on "Broken World", a song that was included on the second installment of FIVE FINGER DEATH PUNCH's greatest-hits collection, "A Decade Of Destruction - Volume 2", which came out last fall.

The band has had two dozen songs hit the Top 10 on the Mainstream Rock or Hard Rock Digital charts, starting with "The Bleeding". FIVE FINGER DEATH PUNCH's 2010 cover of BAD COMPANY's "Bad Company" was certified platinum for accumulating a million certified units.

FIVE FINGER DEATH PUNCH's most recent album, 2020's "F8", debuted at No. 1 on rock charts around the world, with Top 10 mainstream chart debuts in the U.S., Austria, Australia, Canada, Finland, Germany, Sweden, Switzerland, the U.K. and more. "F8" features No. 1 hit singles "Inside Out", "A Little Bit Off" and "Living The Dream". 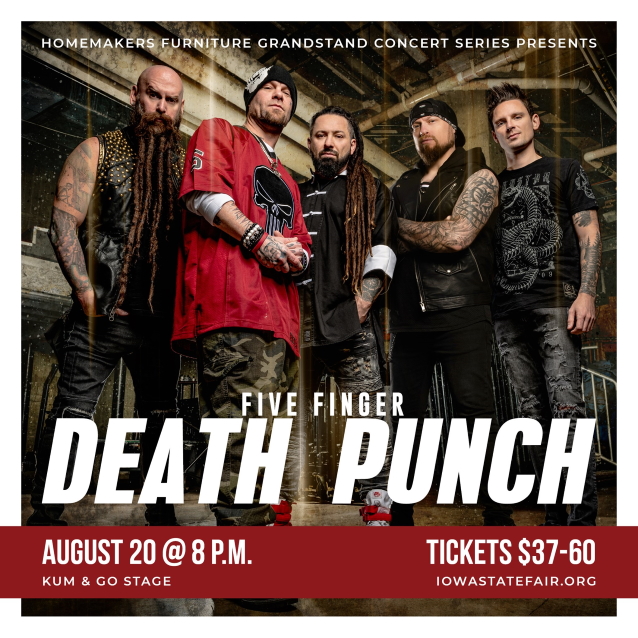