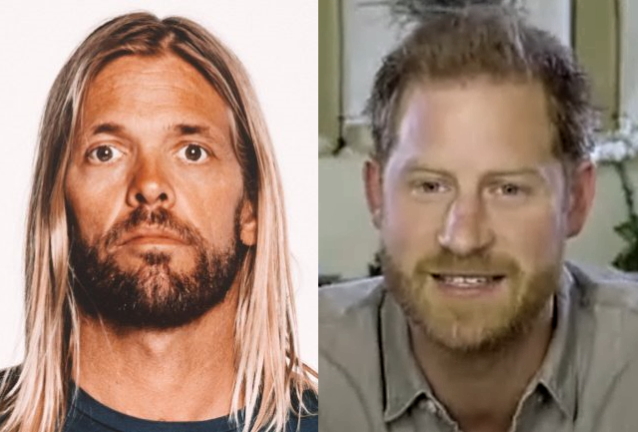 According to Grohl, he got a visit from Harry, now known as the Duke of Sussex, while he was staying in London after hurting his leg while touring with the FOO FIGHTERS in Europe in 2015.

"[Prince Harry] came over to hang out — it was this big hotel suite — and he's so chill that, like, my nanny was there, my kids were there," the 52-year-old FOO FIGHTERS frontman said. "They didn't know he was the fucking Prince of England. They were just, like, 'Hey, your friend is here.' He brought me this thing to hold my iPad so I could just watch movies and shit. It was great. He's cool."

Dave added that he and the other members of FOO FIGHTERS had hung out with Harry before. "He smacked Taylor in the face one time," he said. "How hard was that smack in the face?"

"It pissed me off, actually," Hawkins said, explaining it happened before a gig in England when the band was jet-lagged from the long trip they took to get there. "He walked in — it's Harry and a bunch of his people around him — and he goes, 'How are you doing?' And I'm, like, 'I can't wake up. I'm so tired. I've gotta play. I can't wake up.' And he just goes bam. And I went, 'You motherfucker.' He was, like, 'Are you awake now?' or something like that. "I mean, I got slapped in the face by the Prince. That's okay, really, if you think about it. But at the moment, I was, like, 'You slapped me, dude.'"

Hawkins previously talked about the slap in question during an interview with BBC News in 2017. He revealed that it happened before the 2014 Invictus Games. "I was a little like, 'What was that?' It was great, it was funny. I wore that slap with pride," he said at the time.

In June 2015, Grohl broke his leg after falling off the stage during a concert in Gothenburg, Sweden. He underwent leg surgery in London, and Prince Harry was one of the first people to visit him.

FOO FIGHTERS' tenth studio album, "Medicine At Midnight", came out on February 5 via Roswell Records/RCA Records. The LP is a nine-song, 37-minute effort which was produced by the FOO FIGHTERS and Greg Kurstin.