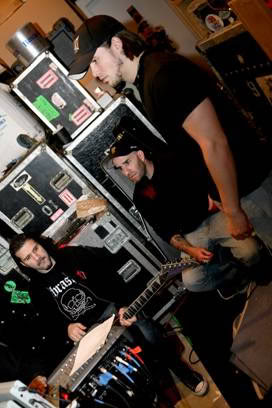 Former ANTHRAX Singer DAN NELSON: 'I Was Ready, Willing And Able To Do My Job'

"On the advice of counsel, I have remained silent to the statements issued by ANTHRAX in recent days and now must address these issues to my loyal fans and others. I want to set the record straight.

"I was never seriously ill or sick at all, as reported in ANTHRAX's July 17, 2009 press release. This extremely inflammatory statement hurt me tremendously. This statement misled fans, friends and family members into believing that I was seriously ill when I was not. I was not aware such a statement was being issued and it came as a total shock to me, as I'm sure it did to all of you. It was the other band members' decision to cancel the tour dates, not mine. I was ready, willing and able to do my job.

"After issuing the press release, the other band members decided, on their own accord, that I had 'resigned' from the band. I never resigned from the band.

"Even in view of this action and stance taken by the band, as late as earlier today I made it clear that I was ready willing and able to continue to fulfill my obligations. After that offer was made, the most recent press release was issued which announced my 'confirmed' departure from the band. I was not aware of the contents of this release until after it was issued, nor was I aware that ANTHRAX was canceling the European and SLIPKNOT tours.

"I regret any disappointment and confusion this situation has caused.

"I want to thank my loyal fans, family and friends for all their support and their many messages, emails and calls.

"My counsel has been instructed to take any and all appropriate actions to address this situation."

ANTHRAX's manager, Izvor Zivkovic of Split Media, told BLABBERMOUTH.NET earlier today that the band's new album, "Worship Music", which was previously due in Europe on October 23 via Nuclear Blast Records, will now be "pushed back to a later date." It is not presently clear if Dan Nelson's tracks will be erased from the CD, which was recently mixed at a New Orleans studio by Dave Fortman (a former member of UGLY KID JOE who has also worked with artists such as MUDVAYNE, EVANESCENCE).

ANTHRAX will play the August 1 Sonisphere festival in Knebworth, England, with John Bush (ANTHRAX's singer from 1992 to 2005) joining them for a very special one-off performance.

Dan Nelson and ANTHRAX drummer Charlie Benante were interviewed by the "Metal Eye" show on Z1 TV when ANTHRAX performed at this year's edition of the biggest Croatian music festival, T-Mobile INmusic festival, on June 25, 2009 at Jarun lake in Zagreb, Croatia. Watch the chat below. Also available is footage of the group's performance at the event.