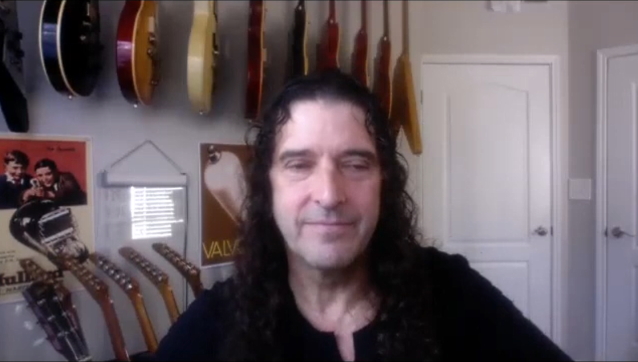 During an appearance on the latest episode of the "Rock 'N' Roll Icons With Bode James" podcast, guitarist Brian Young reflected on the experience of playing with David Lee Roth for a four-year period in the early 2000s. He said (see video below): "It was great. To be in the David Lee Roth band, you've basically gotta go through this boot camp to toughen you up. I wouldn't say [he's] difficult, but he expects a lot, and he's demanding, and he's a perfectionist for everyone else, even for himself. So working with him wasn't easy."

He continued: "I heard about his mood swings before I joined, but I didn't see a single one for the first month. Then finally, when it happened, it was, like, 'Okay, he can get where it's like a volcano's erupting.' So he kind of has a little bit of an up-and-down mood-swing type thing. But when he's in a great mood, it's the coolest hang you'll ever have in your life — absolutely. And when he's in a bad mood, it's a bummer. But like I said, the good thing is it's training ground. After you play with him for a while, you can handle anything."

Young reiterated that playing in Dave's band "toughened" him up "for being able to deal with different things." He explained: "I've always been pretty easy-going. And what I liked working with Dave is he's the boss, and you know it. He's paying everybody. It's his name on the marquee, so there's no argument. When Dave says something, you just do it. And I do like that. Because when you're in a band with four guys, and there's no real boss, then it can become more arguing and this and that — 'Why do you say this?' Or, 'Why did you get more credit?' But when you're working with a leader, and it's a for-sure thing that he's the leader, it's very easy to just go, 'Okay…' And whatever he says, whether it's right or wrong, everybody agrees [with it] or not, you just go, 'Hey, he's the boss. It's his way.' And then, if it's a mistake, he owns up to it. So that's the part that made it kind of easy. You just do what Dave tells you, and everything's fine."

"Rock 'N' Roll Icons With Bode James" is an "organically formatted interview program" with the leading names in both the worlds of rock and roll and comedy. The podcast can be heard on on all major podcast platforms as well as on YouTube.